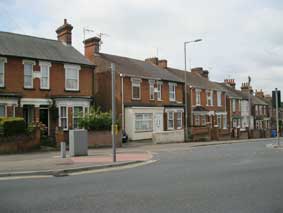 'F.L.S.' appears on a number of house name plaques throughout Ipswich and elsewhere. It stands for Freehold Land Society, shorthand for the organisation which, from Victorian times onwards, enabled 'ordinary people' to become freeholders for  the first time. See Christ's Hospital School, Tyler Street/Purplett Street, Cavendish Street, Named buildings pages for further examples. Plaques showing name, date and 'F.L.S.' were built into house frontages from the late 1880s. They indicate that the houses were actually built by the F.L.S., as distinct from land which was sold/allocated by the F.L.S. and housing built by the owners, as with the housing on the California estate.

Ipswich Building Society was formed in 1849 as the Ipswich & Suffolk Freehold Land Society, part of a national movement to create ‘forty shilling freeholders’ – giving the ordinary man* the chance to buy enough land to entitle him to vote. The Society purchased large areas of land all over Suffolk, dividing it into smaller plots, or allotments, which were then – following a ballot – sold to members of the Society (mortgages were arranged by the Ipswich & Suffolk Permanent Benefit Building Society arm). Needless to say, business people and speculators bought up numbers of plots from some of those who were successful in the ballot, so that the best intentions of the Society were subverted.
[*... and it was all men, of course; it was not until 1928 that the Conservative government passed the Representation of the People (Equal Franchise) Act giving the vote to all women over the age of 21, on equal terms with men.]

The roots of the Freehold Land Society movement go back to James Taylor (1814-?) in Birmingham. Taylor, who promoted the movement around the midlands, explained the economic principle on which such a society works "Now then for a creed, which is simply this: buy land wholesale and sell it to the members retail at the wholesale price. This is the whole of our creed – the all-in-all of our operation. This is, in fact, the very essence of the Freehold Land scheme."

Lancaster Road is a short street running between Palmerston and Warwick Roads. It is of interest because the houses in it were the first to be built in Ipswich by the Freehold Land Society in 1866. The terraced dwellings were described at the time as high quality, 2-bedroom, workman's houses.

This article from the Ipswich Star (Monday, April 27, 2009) gives more information about the organisation. [We have made a small addition and placed the developments in date order.]
'Have you ever wanted to discover the history of your home?
Well thanks to records collated by one woman over 20 years, amateur historians will now have the chance to find out more about the buildings in which we live. James Marston reports.

It is a collection that was always intended to be loaned to Suffolk Record Office. And for Margaret Hancock the historic records of the Ipswich and Suffolk Freehold Land Society have been a passion that has lasted two decades.
She said: “We started 20 years ago when the Ipswich Building Society decided to employ an archivist. The archives were found then in a couple of tin trunks in the society's head office in Dogs Head Street. No one knew what to do with them but someone realised they should be kept.”

The archives, now indexed and catalogued by Margaret are to go on permanent loan to the Suffolk Record Office in Gatacre Lane, Ipswich. Margaret said: “I've spent the last 20 years working on cataloguing most of the collection. It is an important archive to the local area. “It contains a mass of documents, plans that chart the history of Ipswich, Felixstowe and Lowestoft and the role the Ipswich and Suffolk Freehold Society played.”
The Society was set up in the 1840s after a change in the law introduced the 40 shilling franchise.

Margaret said: “The franchise meant that if you owned property valued at 40 shillings or more you could have the vote. People were encouraged to own their own property in order to be able to exercise the franchise. “The Society bought up large estates and tracts of land and divided it into plots that were big enough to qualify for the franchise and the Ipswich and Suffolk Freehold Land Society was one of the most successful in country.”

Estates built by the Society include roads and areas of which many still exist in Ipswich and other towns today.
They include: 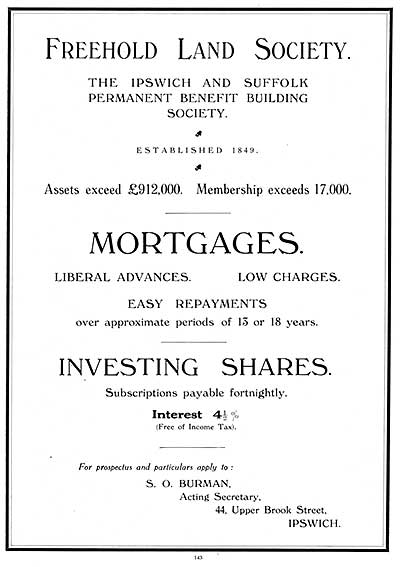 1932 advertisement
The Society carried on allocating plots of land to members right up until the 1930s with the Shafto Road area of Ipswich being one of the last developed in 1933. Margaret said the huge popularity of the schemes led to oversubscription and a ballot system was introduced. She said: “In some ballots there were 40 plots with as many as 1,000 people in the ballot. Once you had got a plot you had the right to buy the house and the money was advanced by the Ipswich and Suffolk Permanent Benefit Building Society in much the same way as a mortgage today.”

The records now loaned to the Suffolk Record Office also include the ballots, minutes of the official business of the society, mortgage documents, a number of pass books, marketing and publicity material including posters, advertising material, photographs and papers relating to official histories, the deeds of the land and estates bought by the Society – some of which date back to the 1600s – architectural plans for houses, more than 300 bundles of title deeds, 300 sets of plans of the roads and plots. Margaret said: “The majority of the archive is coming to the Record Office but there are some things that have to be catalogued so my work isn't finished yet.” The collection now on loan is due to be made available to the public later this year. It will be stored in the Suffolk Record Office's temperature and humidity controlled strong rooms. Margaret said: “It is hugely exciting to see the collection being made available to the public for the first time. For me it's like watching your child go off to university.”

Suffolk Record Office public service archivist Louise Clarke said: “This is an invaluable collection. It charts the development of a number of Suffolk towns and provides a fascinating insight into social and economic history. The collection will be an important resource for people who are researching the history of their homes and it contains a wealth of information that we simply haven't had available previously."

Ipswich Building Society is the only society in the UK to employ an archivist. At Suffolk Record Office some documents date back to the 12th century.'
[http://www.ipswichstar.co.uk/news/features_2_511/track_your_house_through_time_1_171887]

Background
The use of land ownership as a political tool to increase the number of voters and to effect change probably has several originators in Freehold agitation. The Chartist leader Fergus O’Connor also Richard Cobden and John Bright, leaders of the Anti-Corn Law League, promoted the movement.
In the late 1840s and early 1850s a series of freehold land societies was formed. The first was started in Birmingham in 1847 by James Taylor (Junior) 1814-1887, who had emerged  as a national Temperance leader in 1840. By the end of 1847 he had assisted the formation of six independent societies: Dudley, Stourbridge, Coventry, Worcester, Wolverhampton and Stafford. With the Birmingham society, they comprised 2,108 members with 2,837 shares. While not in the vanguard of such societies, the Ipswich & Suffolk Freehold Land Society can certainly be said to be part of that first wave (which included those in Carlisle, Burton-on-Trent and Burslem), being founded in 1849. By December 1852, nationally there were 130 societies with 85,000 members with 120,000 shares, 310 estates and 19,500 allotted freeholds.

Cromwell Street
One corner of the FLS developments in Ipswich, which hasn't survived so well, is Cromwell Street. This perfectly decent street of Victorian redbrick terraces led off St Nicholas Street to Friars Road. The story of  the dramatic changes are described in our Ipswich tomorrow page. 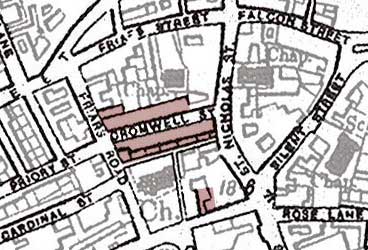 1934 map detail
The detail (above) from Borin's  FLS map of housing developments shows the terraces, starting on the north side to the west of the single-storey building behind the corner shop. In period photographs this shop has always been a corner tobacconist and newsagent. Both those roles have been stolen by the supermarkets and in the 21st century it is a collectables/vintage shop.  The modern view of the north side (the south side having disappeared) reveals a double-fronted house and five terraced houses before the Willis building intervenes. 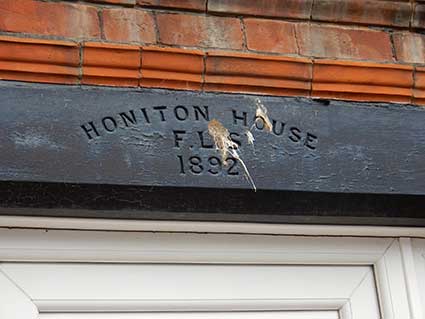 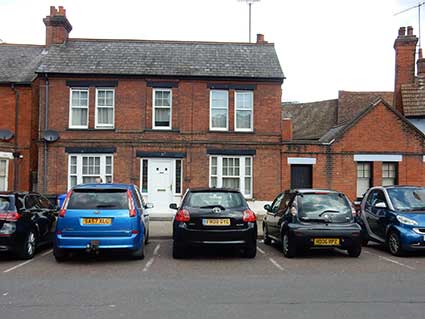 [UPDATE 8.5.2019: John Bulow-Osborne writes: 'I have long been aware that your website is God's gift to the residents of Ipswich and its environs, and am full of admiration for your thoroughness and dedication to detail when adding to it. OK, that's enough of the sycophancy!
However, I also know that your website has very comprehensive coverage of the Freehold Land Society. But I could not find on it the house in the attached images that I took this morning.
It lies a bit off the usual areas of the F.L.S. and maybe you've covered it anyway. (In case the pictures don't tell you, it's just off St Nicholas Street. Or, maybe, just maybe, the first occupant was, say, Fred Laurence Smith.... Next time I take photos, my kit will include a bucket of water and a mop with a long handle...' (Many thanks to John for the praise and the photographs; them seagulls have a lot to answer for.)] 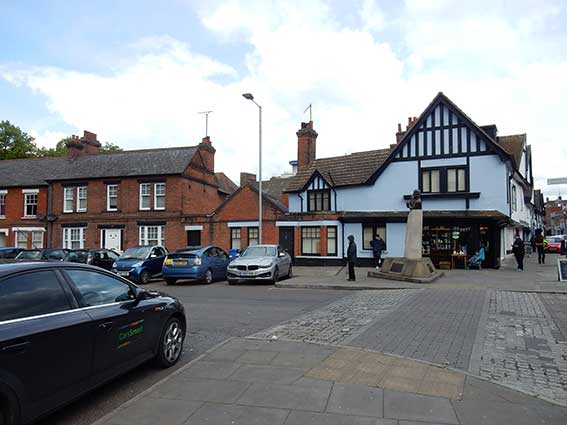 Honiton House photos courtesy John Bulow-Osborne
The long-shot shows the timber-framed and jettied shop at the right and the Obolensky sculpture in front of it. Honiton House is to the left of this, with the first of the five surviving terraced houses visible. See our Ipswich tomorrow page for 'The Ring-Road that never was' and how it affected Cromwell Street.

The remnants of Crowmwell Street in 2017

Pearce Road
Margaret Hancock write: 'Street names in Ipswich. Freehold Land Society Minute Books sometimes record what the committee want to call certain streets but not always the reason why. As an example, I'm attaching my notes from Minute Books regarding the Orwell Road Estate in case you haven't seen them. Also copy ballot paper and estate plan.' (Acknowledgements to Margaret and Ipswich Building Society, the successor to the FLS). 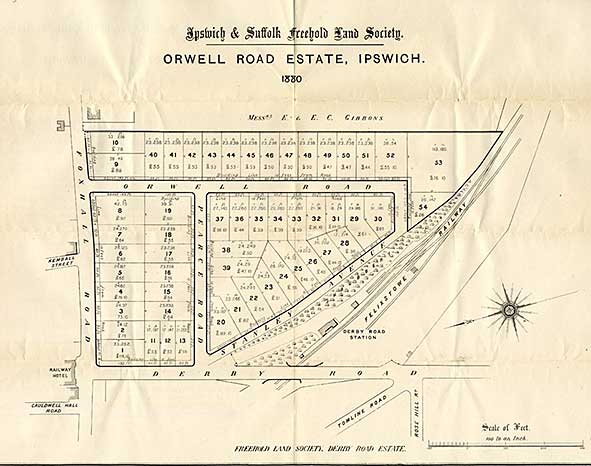 FLS map 1880, courtesy Ipswich Building Society
Above: this small corner of the FLS housing and road developments in the east of Ipswich is bounded by the Felixstowe branch line. On the plan, north is to the left. On the ballot paper shown below, note that it should be returned to 'Mr. Arthur Pearce' at FLS – presumably a relative of the first Secretary of FLS, Joseph Pearce, after whom Pearce Road is named. See Street name derivations. 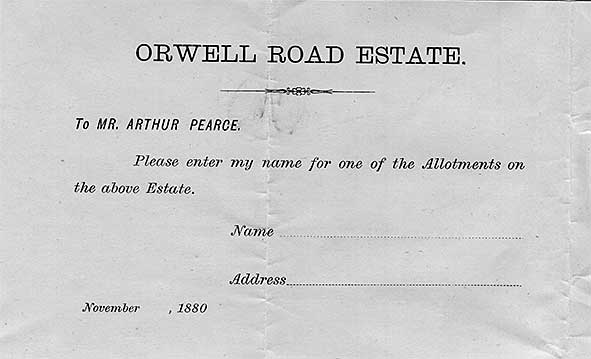 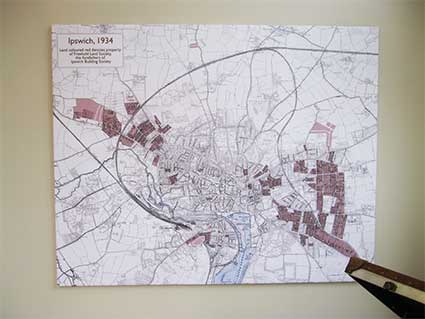 2018 image inside Mutual House
In 2017 Borin Van Loon was commisssioned by The Ipswich Building Society to compile a map of Ipswich showing the extent of the estates and developments by its predecessor The Ipswich & Suffolk Freehold Land Society. In January 2018 it was exhibited in the public area of Mutual House (formerly Parr's Bank) on the corner of Princes Street and King Street when it opened as the town branch of the Society. Many hours of work, with the invaluable assistance of Jo Leah of Ipswich Building Society and archivist Margaret Hancock led to this unique piece of work. Many thanks to Gordon Pugh for lending a copy of his father's map upon which these FLS developments could be imposed. 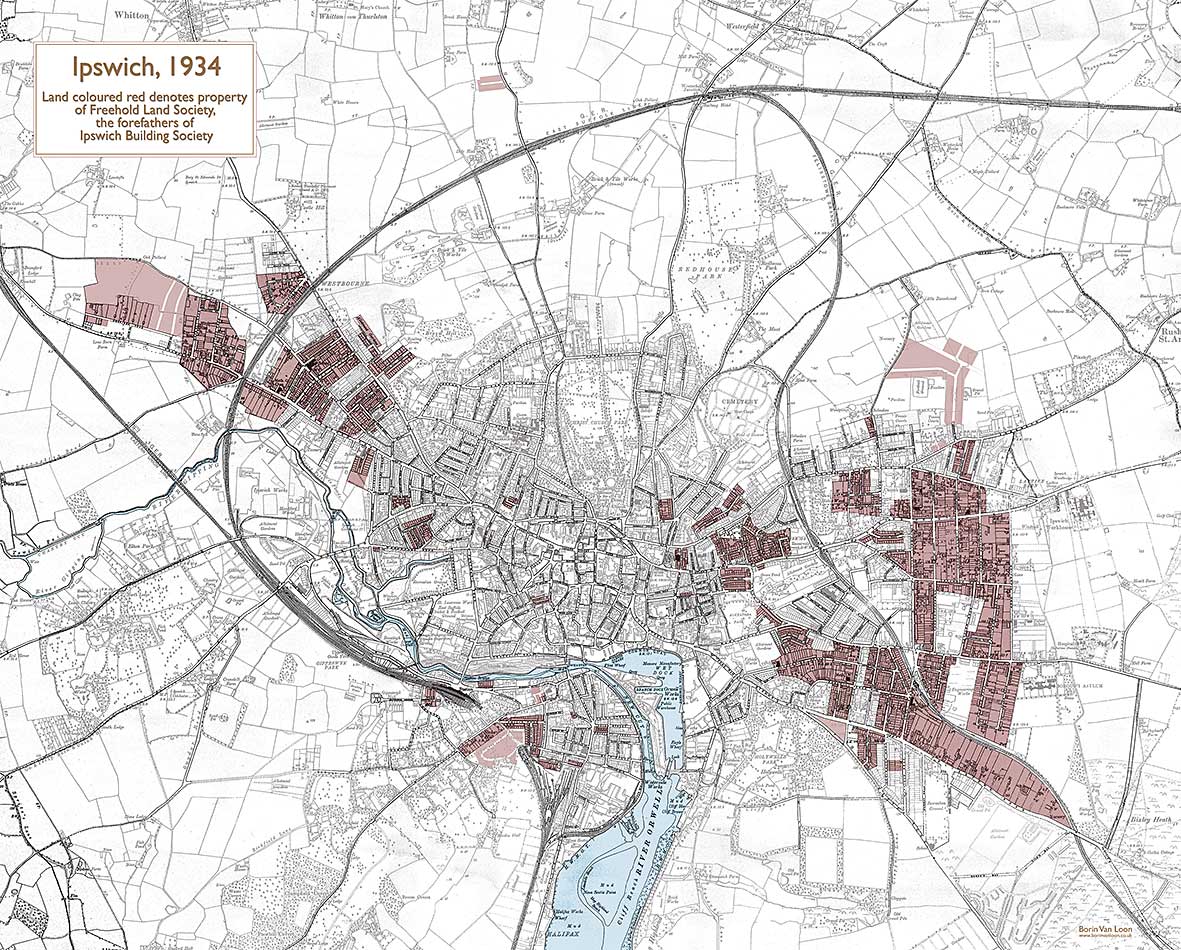