Alan Road Methodist Church
As part of the investigation into Rosehill Library, the local churches have been included on this site. Walking from the Bishop's Hill end of Rosehill Road you pass on the left first, 'The Old Manse', with its large main entrance at the side of the house, then the side wall of the Methodist Church on the corner of Alan Road (see Street name derivations). 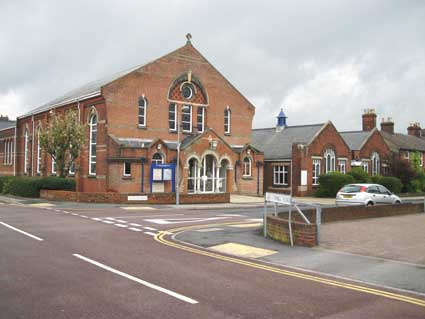 The view of Alan Road Methodist Church and Hall with a rather battered 'Rosehill Road' street sign in the foreground. The Ipswich Borough Council Local List text: "Alan Road Methodist Church. Built in 1880 as the Wesleyan Methodist Chapel by AlfredHubert. Redbrick with early Art Nouveau windows. The adjoining schoolroom of 1877 was probably the original chapel. The building occupies a corner site at the junction of Alan Road and Rosehill Road and is of considerable importance through its dominating gabled ridge line and arched porch." 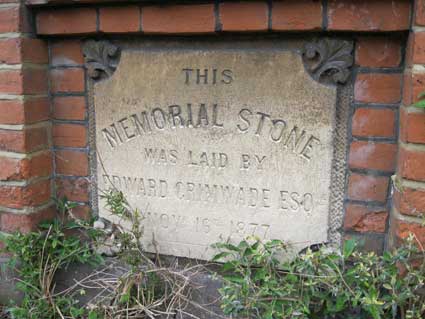 The first of five foundation/memorial tablets is seen above with its cartouch shape, fleur-de-lys upper corners and arching, condensed capitals in the second line. Around the corner, to the left of the main entrance is a second tablet:

Then further down Alan Road is the hall of the Methodist Church with three more tablets: 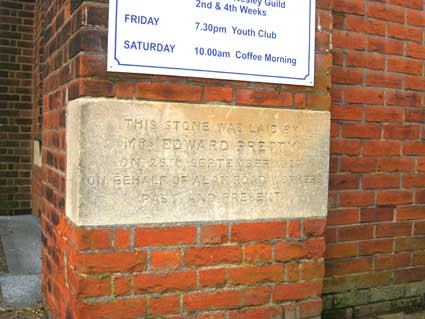 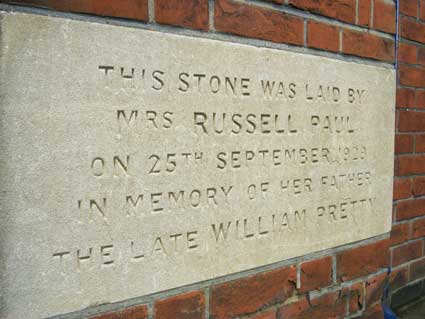 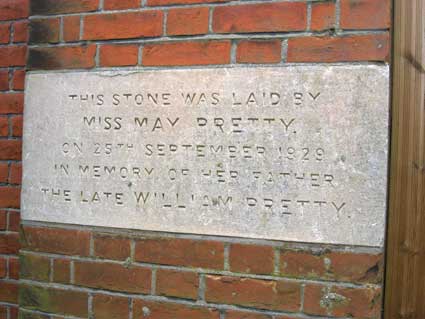 'THIS STONE WAS LAID BY
MISS MAY PRETTY
ON 25TH SEPTEMBER 1929
IN MEMORY OF HER FATHER
THE LATE WILLIAM PRETTY.' 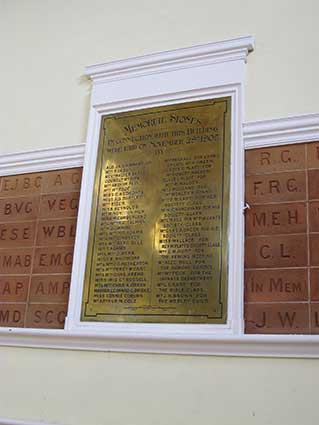 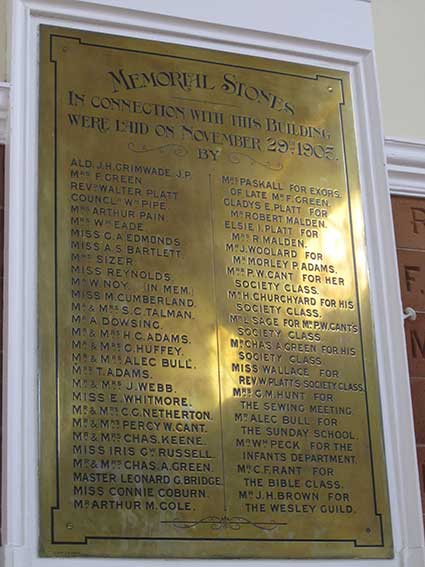 'MEMORIAL STONES
IN CONNECTION WITH THIS BUILDING
WERE LAID ON NOVEMBER 29, 1903
BY...' 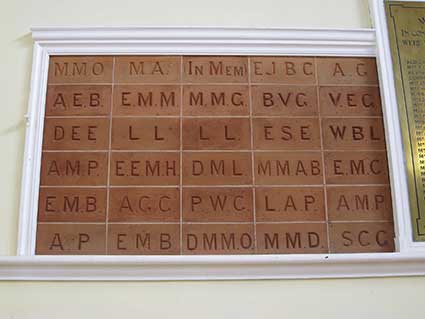 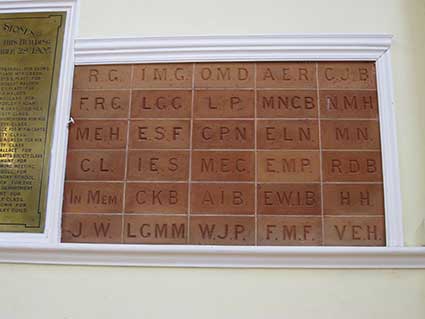 Incised into the flat face of buff/red bricks are a range of initial capital letters including: ' IN MEM' (twice), mounted on grids on either side of the central brass memorial plate. 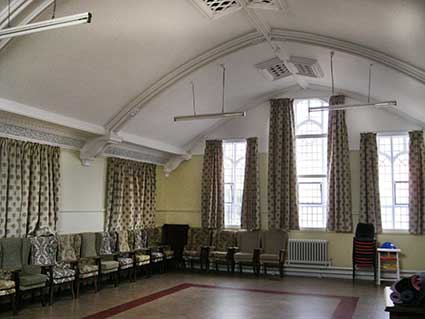 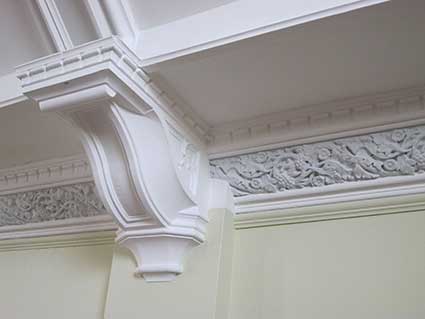 A glimpse of the arched ceilings, brackets and mouldings in two of the rooms. 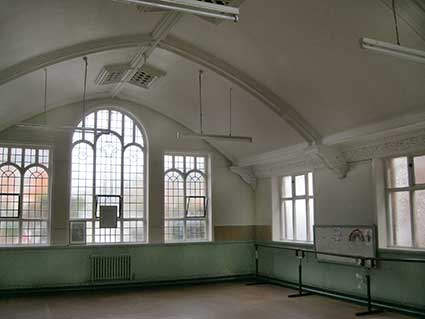 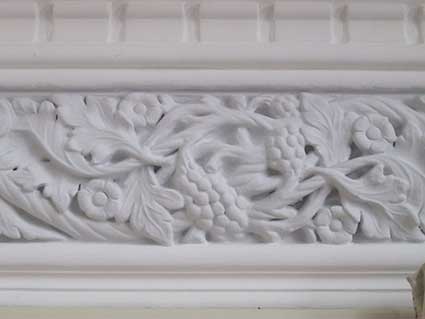 Below: ceiling bosses and vents. 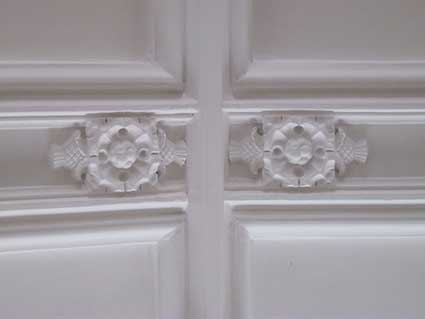 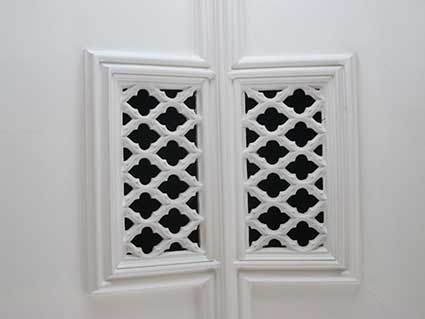 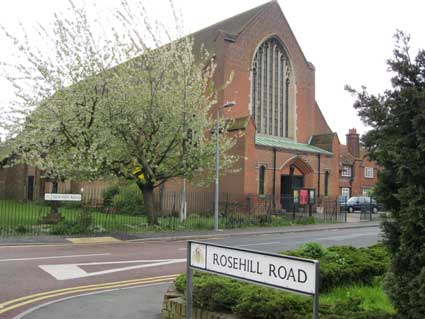 And to show just how the church is hemmed in by surrounding houses and gardens... 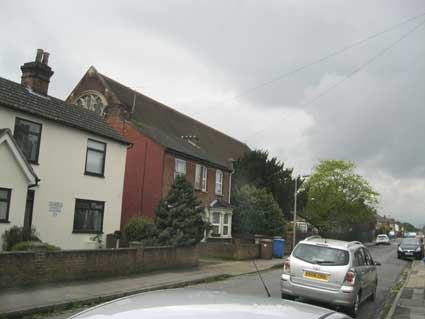 And the view from Newton Road, complete with well cared-for WWII Anderson shelter in the foreground. The eastern gable wall has a large elaborate circular window with double mandala shape tracery and Art Nouveau stained glass, the leading just visible in the photograph. 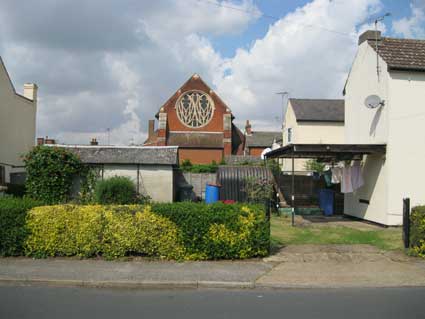 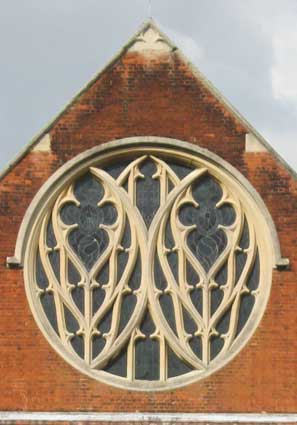 2014 images
The Church of St Batholomew is Listed Grade II: "Parish church. 1896. Designed by Chas Spooner. Red brick with ashlar dressings and plain tile roof. Nave with aisles and a chancel under a single roof. Western entrance front with projecting porch between 2 very deep gabled buttresses, with a copper lean-to roof. Central doorway with triple chamfered and moulded arch, and double doors. Above an enormous 7 light window within a deeply chamfered, pointed arched surround, with hood mould and label stops. Above, in the gable is ashlar diaper work. The aisles have 3 pairs of pointed arched windows with buttresses between them. The eastern gable wall has a large elaborate circular window with double mandala shape tracery. Interior has 3 bay nave arcades with double chamfered and moulded arches which die into octagonal piers with moulded bases. Contemporary marble pulpit. The eastern circular window has Art Nouveau stained glass."

On 199 Rosehill Road, diagonally opposite the church, we find: 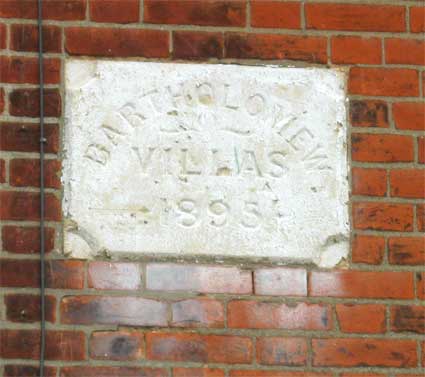 For more house name plaques in this road see Rosehill house names.
And directly opposite on the north side, one of the original street signs: 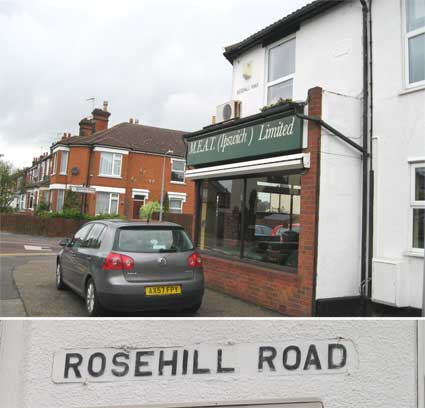 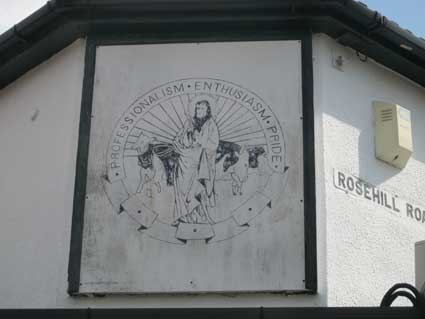 The painted sign at the corner of the M.E.A.T. (Ipswich) Limited shop:
'PROFESSIONALISM, ENTHUSIASM, PRIDE'
signed at lower left: 'IAN BENNETT 28.11.1989'. Who is this 'enthusiastic' biblical butcher caressing a cleaver?

The original cast iron sign at the corner of Newton Road and Rosehill Road sits between the burglar alarm and the air conditioning unit. The metal flanges which clip it to the wall are visible, but thick rendering and much whitewash have meant that this sign is easy to miss.

As far as we can tell there is no lettering on the exterior of St Bartholomew's Church itself.
For Holy Trinity Church and former Vicarage click here.