The bi-centenary of the Abolition of Slavery Act which became law on 25th March, 1807 gave us all a chance to reflect on the spoils of Empire and the price paid by so many anonymous people who were sold into slavery in the production of those vast riches. Two of the important figures in the history of Ipswich are Dykes Alexander and his son Richard Dykes Alexander, a noted photographer of the town. The latter built his house on the corner of St Matthews Street and Portman Road; long empty, this distinguished building was in 2009 extended and refurbished as student flats. When Richard Dykes Alexander (see our plaques page) made land available for housing in the 1850s he stipulated that some of the street names should be those of leading abolitionists. Four British names and arguably four American names appear in the list. 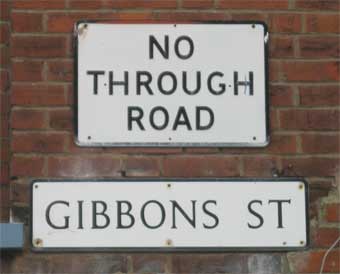 2014 images
Abigail Hopper Gibbons (1801-1893): an American Quaker who aided runaway slaves; she also nursed in the American Civil War and became a teacher. Her father, Isaac Hopper, and her new husband, James Gibbons, were disowned by the Society of Quakers for their anti-slavery activities. See Elliott Street Bakery. 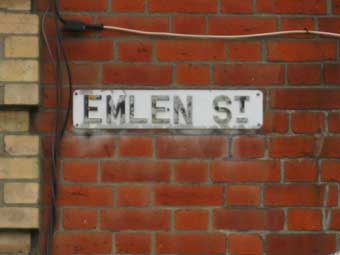 Samuel Emlen (1789-1828 1766-1837): a Quaker and doctor of medicine [see update below]. He created a an American institution for the education and maintenance of children of African and Indian descent and he lived in Burlington, New Jersey, whence we get the name Burlington Road.
[UPDATE 12.12.19: 'Hi Borin,
Thanks for doing your Historic Lettering web site -- very interesting!  I am distantly related to the Samuel Emlen*** you mention on the abolitionists street names page.  I never would have known he had a street named after him in Ipswich if it wasn't for your web site. I have a small correction for you.  You give Samuel Emlen's birth/death dates as 1789-1828 and say he was a doctor of medicine. That's actually a different Samuel Emlen (there were a lot of them).  The Samuel Emlen you want was born in 1766 and died in 1837.  He was not a doctor.  And he was married to another one of William Dillwyn's daughters, Susannah.  You are correct that he founded the institute for the education of children of African and Indian descent, and that they lived in Burlington, New Jersey. Thanks again for the great web site.
***I'm actually not a descendant of that Samuel Emlen, but rather the Dr Samuel Emlen [1789-1828]  that you originally had there.  The two Samuel Emlens were 2nd cousins, once removed.  I have two letters written by Susannah Dillwyn Emlen to Dr. Samuel Emlen, handed down to me through the family.  She was quite prolific with her correspondence -- several libraries in the Philadelphia area have collections of her letters.
-Dave Emlen, Rochester, New York.' Many thanks to Dave for this valuable correction and additions.] 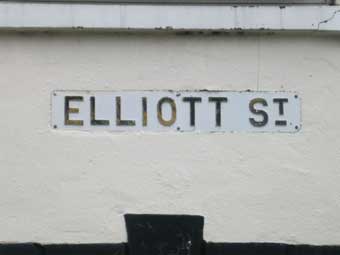 Edward James Eliot (1758-1797): an MP and friend of Wilberforce and Pitt, in whose government he served. An active supporter of abolition. On wonders why the 'l' and 't' in the name were doubled when it came to the street-naming. See Elliott Street Bakery. Could it be just an error... or is it that Elliott Street in Ipswich is actually named after somebody else?
[UPDATE 18.5.2019: 'I have seen your page before, as I've been interested in the Abolition movement for years! Going through some old newspapers from Ipswich, it appears that most of those street names came into being in the 1860s, as they all start appearing in notices at the end of that decade.
While the name of Edward James Eliot was often misspelled, it seems unlikely that it would have happened on a street sign. It's not impossible, but I would think it rather unlikely.
It's interesting to note that some of EJ Eliot's great-grandchildren ended up living in Ipswich! They each have web-pages: John Eliot Pringle and Edith Blanche Pringle.
The most remembered family home was 27 Graham Rd, Ipswich. It was written about by the great-great granddaughter of EJ Eliot:
-Sarah (Eliots of Port Eliot website).' 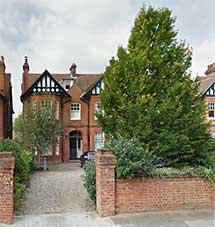 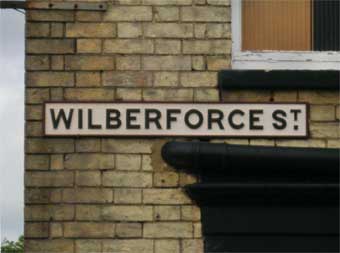 William Wilberforce (1759-1833): independent MP for Kingston-Upon-Hull (commonly called Hull), friend of William Pitt, The Younger. The main public face of the activisits, he is buried in Westminster Abbey next to Pitt. See also Primitive Methodist Chapel. 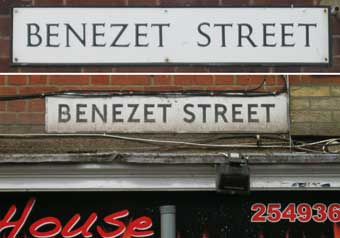 Anthony Benezet (1713-1784): born in France, moved to Holland, London and finally to Philadelphia; he bacame a Quaker. His writing influenced Clarkson's Cambridge essay opposing slavery. We have a comparison of period and contemporary views of Benezet Street. 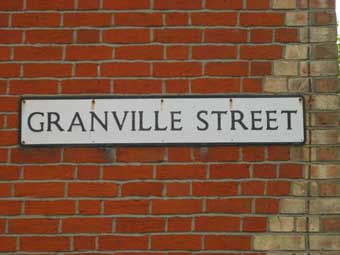 Granville Sharp (1735-1813) challenged slavery in law and was the first President of the 1787 Abolition Committee. Interesting that the Borough chose the first name of this gentleman for the street name, particularly as we haven't been able to trace an already-existing 'Sharp Street'. 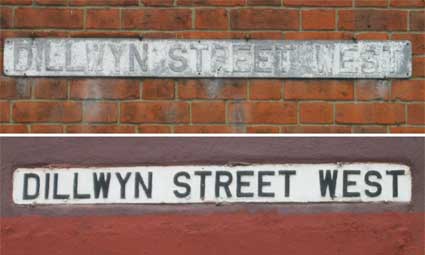 Above: Dillwyn Street: so good they named it twice.
William  Dillwyn ([1743]-1824): a Quaker merchant born in Philadephia, he campaigned against slavery in England from 1774. His daughter, Ann, married Richard Dykes Alexander (see our Plaques page). Samuel Emlen (see above) was married to Susannah, another of William Dillwyn's daughters. 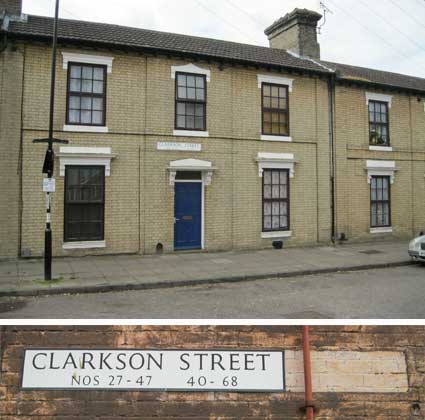 Thomas Clarkson (1760-1846) is the best known of the abolitionists, living for the last thirty years of his life at the late 16th century Playford Hall. William Wilberforce's right hand man, he is said to have travelled 10,000 miles on horseback over twenty years interviewing sailors, lecturing, collecting facts and eyewitness accounts for the movement and for Wilberforce's speeches. There is a memorial to Clarkson in Playford church. Home of St Matthews Hall lettering. See also Primitive Methodist Chapel. 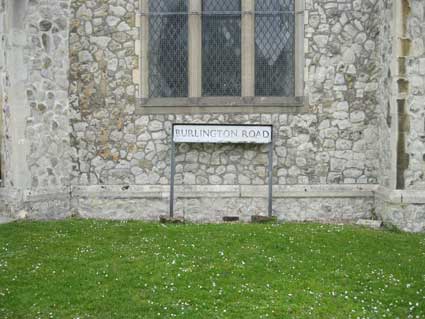 Burlington Road see Samuel Emlen (above). The sign unearthed from its moorings, leans against the former Presbyterian church wall (The Oasis Centre)  in 2014. 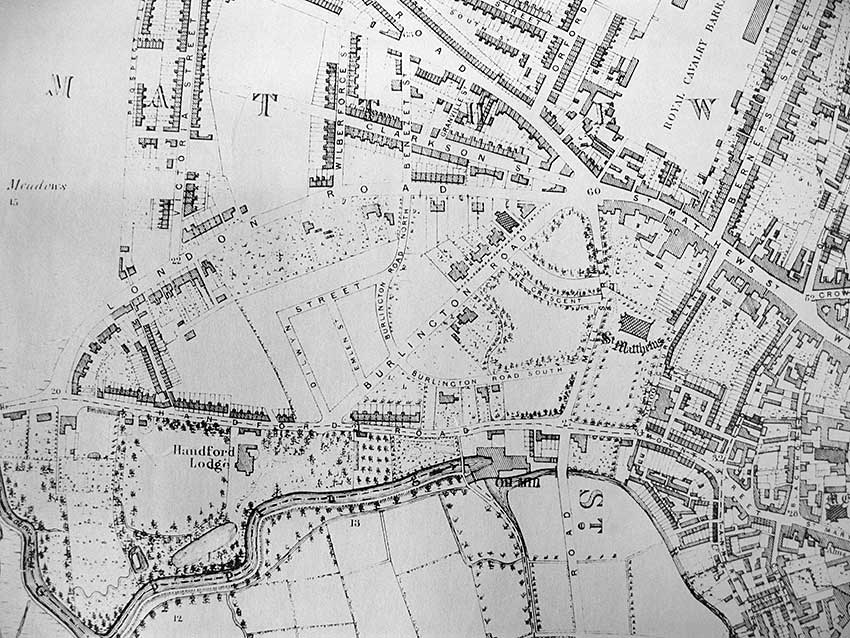 1867 map
Richard Dykes Alexander's house is situated at the top of Mill Street (now the upper section of Portman Road) as it meets St Matthews Street. The map detail (above) from White's map of Ipswich 1867 shows the garden behind the house in which the pioneering photographer was himself photographed with family members (see below). The large parcel of land which he owned enabled the residential streets to be laid out celebrating the slavery abolitionists in their naming. At this date two curving roads come off the centre of Burlington Road and they are 'Burlington Road North' (meeting Benezet Street at London Road) and 'Burlington Road South' (meeting Mill Street). Today they are Stevenson Road and Dalton Road respectively – presumably named after Scottish novelist, poet, essayist, and travel writer, Robert Louis Stevenson (1850-1894) and author of adventure stories for youth, William Dalton (1821-1875). However, English chemist, physicist, and meteorologist, John Dalton FRS (1766-1844) is a possible inspiration for the latter. In 1867 Gibbons Street and Elliott Street had yet to be built.
'Handford Lodge', home of engineer Peter Bruff, can be seen south of Handford Road, with Handford Mill (marked here 'Old Mill') to the east, near to the end of the wider part of the Little Gipping river. At this date the course of the river down to join the Orwell was at ground level (today run through a culvert below the roads and pavements). The 1867 map labels all parts of the river 'Gipping'; today, this branch is known as the Alderman Canal (see our Water in Ipswich page for more information about the Ipswich rivers). 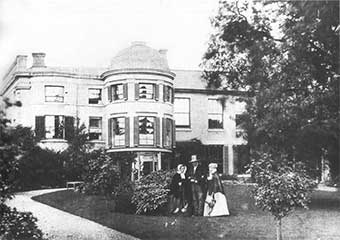 We are indebted to the Ipswich Society Newsletter, Issue 168, July 2007 for inspiring the beginnings of this page.
See also our Lettered castings index page.