As Ipswich grew into a thriving centre for shipping and agriculture, rope was an increasingly essential commodity. Ropewalks sprang up around the docks to meet demand. Ropewalks are long lanes, sheds or open areas where ropemakers make rope by walking back and forth. Yarns are spun together before being twisted into strands, which are then combined into thicker ropes.

Ogilby's map of Ipswich of 1674 (detail below) labels both the Rope Walk/Ropers Lane 'Ropeyard' and that between 'the way to Brightwell' (Back Hamlet) and the way to Nacton and Trimly and ye Fort' (Fore Hamlet) – both underlined in red on the map. Note the legend 'Claypitt for Brick & tyle' directly south of the Church of St Helen and at the western end of Rope Walk, signifying a long-standing pottery here. Note also the oval shaded area south of this labelled (very small): 'Clay pit'. 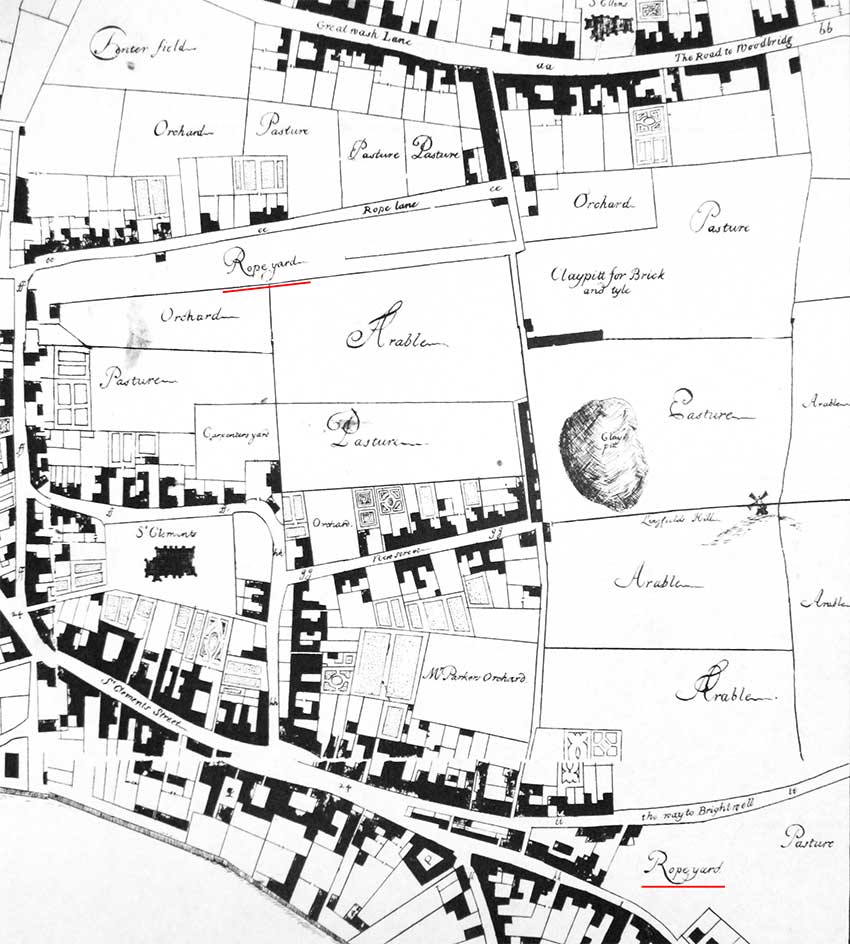 1778 map
1. Rope Walk (Ropers Lane)
The biggest and oldest ropewalk in Ipswich was south of today's Rope Walk (shown here as 'Rope Lane'). Ropers Lane (an alternative name) operated from 1625 until 1818 and at its peak it was about 300 yards long. In 1625 Thomas Gallant was given the use of 'ropers lane' for ropemaking at an annual rent of ten shillings. Twenty-five years later Frauncis Searle was granted permission to use 'Roaperes Lane' (another alternaative) for ropemaking 'as latelie Gallant had the same And under the same yearlie Rent that Gallant pd for the same during the Townes pleaseure'.
Note that the stretch of lane which today we know as Eagle Street is all 'Rope Lane' in 1778. Also that today's Orwell Place is labelled 'Stepples Street', to the left of the 1778 map, which was named after the stepping stones which were installed here to assist pedestrians to avoid getting their feet wet from the waters of The Wash – Upper and Lower Orwell Street.

2. Back Hamlet
John Ogilby's Ipswich map of 1674 shows a ropewalk in the angle of Back Hamlet and Fore Hamlet (see the 1674 map detail above). The cottages bearing the '1620' date on a bresummer beam have been called 'Ropemakers' Cottages' which could be due to their proximity to this ropewalk.

3. Cliff Quay
A ropewalk appears on John Ogilby’s 1674 map alongside thr River Orwell and south of the shipyards in St Clement's parish – somewhere close to where the Cobbold Brewery at Cliff Quay was later built.
[UPDATE 9..2.2017: See the 1805 map of pre-Wet Dock Ipswich and upper part of the River Orwell, which shows 'Rope Ground' on the east bank. Des Pawson of the Sailors Ropework & Knotting Museum (see Links): 'I see that the rope walk at the bottom of Back Hamlet is not shown on Pennington [1778] but my copy and possibly the whole of [it] does not go further out towards the Brewery, so it can be said that the Back Hamlet Ropewalk was gone by 1778 but that the area nearer to the Brewery continued to be used for rope making certainly up to 1804.']

4. Wherstead Road
The Tithe Map of St Mary Stoke from 1839 shows that Nathaniel Rand had a ropewalk at right angles to Wherstead Road, although his place of business in the directories is given as Quay Street where there was probably not the land available to be used in such a crowded area of town.

5. Bolton Lane (Little Bolton)
In 1847 a watch was reported stolen from rope-maker Emanuel Rand’s ropewalk in Little Bolton, (possibly near what is now Bolton Lane, although 'Little Bolton' was a group of dwellings on today's Henley Road around the area of the Upper Arboretum/Ipswich School). So we know there was a ropewalk here for a period of time. 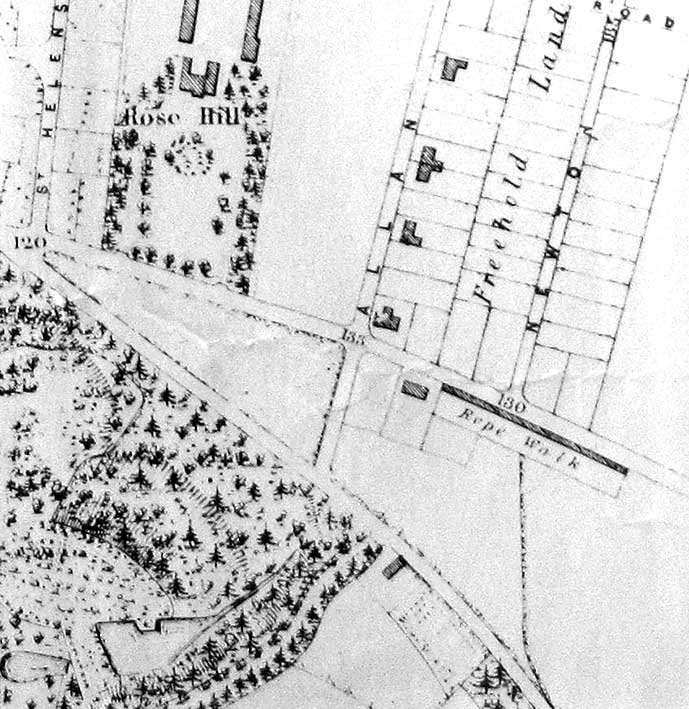 1867 map, enhanced
7. Felixstowe Road
There was a ropewalk on Felixstowe Road opposite the end of Newton Road (as shown on Edward White's map of Ipswich 1867, above)  from 1867 until 1890, first run by Walter Cuckow and later by George Finney. In 1882 it measured 500 feet long, by 15 feet wide. (Note that today's Alan Road is labelled 'Allan Road' on this map.) See also our Rosehill case study for the source of the house name shown at the upper left: 'Rose Hill'. The house still stands at the end of Sandhurst Avenue.

However, apart from the Cuckow there were just two other rope and twine makers who were listed in Stevens Ipswich Directory of 1885 – G W Holmes of Curriers Lane and Charles Taylor of Dogs Head Street, and probably one of them was using this walk. Perhaps their ropemaker was Wm Rose, who was living at the time in Handford Cut and gave his occupation as ‘ropemaker’.
Whilst to have a listing a rope and twine makers did not automatically mean that they made their own rope (they may have bought some or all of their stock in) by the numbers listed it is quite likely that there may be more ropewalks still to be found in and around Ipswich. Whilst the 20th century saw more and more ropes being bought into Ipswich from the large industrial roperies in London and the north of England, there was a small walk at Hadleigh up until just before the Second World War, and the last remaining ropemaker in Suffolk, the Haverhill Rope, Twine and Sack Company, ceased trading in the early 1980s.

We are grateful to Des and Liz Pawson's Museum of Knots & Sailors Ropework (see Links) for the information.


We can do no better than reproduce John Norman's article about rope-making in Ipswich in one of his Ipswich Icons columns in the Ipswich Star, 21 February 2016.
"It shouldn't take a genius to work out, in a maritime town like Ipswich, that the previous industry of the thoroughfare known as Rope Walk was rope making, writes John Norman of the Ipswich Society. In fact in Ipswich there were at least six ropewalks (manufacturing works) and possibly two Rope Lanes (streets).

The present day Rope Walk was previously known as Ropere's Lane with the rope works (or ropewalk) immediately south of the street (under what is today St Edmunds House). The current road got its name from the sheds and cottages that were on the northern side of the walk, a back door onto the works, a front door onto what became the present day Rope Walk. The second Rope Lane was off St Peter's Street but is now lost in history.

The key to a successful rope making business is the length of rope that the facility can produce, the longer the ropewalk the longer the rope that could be produced. This particular facility could run a rope from near Eagle Street to Milner Street (the corner of the grounds of Hill House, today's Alexandra Park), close to 1,000 feet.

The other Ipswich ropewalks were situated closer to the quay side, one between Back Hamlet and Fore Hamlet (under what is today Holy Trinity Church), one immediately south of and parallel with Fore Hamlet and another just south of the shipyards on Neptune Quay. There were, according to Ogilby's map of 1674, three shipyards adjacent to the bend in the river, immediately south of what became Coprolite Street. Another ropewalk was on the level ground at the top of Bishops Hill, close to Alan Road.

The ropewalk close to the river had disappeared from Pennington's map of 1778 but the Rope Walk facility was still in production and remained so until 1818. The end of the 18th Century saw development of rope production on an industrial scale and with it the demise of small scale rope making.

The ropewalks were not alone in their decline, the wool trade was no longer king, the river was silting up and Ipswich was in depression. The Dock Commissioners sought to change the town's fortunes, a steam dredger was purchased, the river was straightened and Ipswich's industrial revolution began.

Ransome had moved into Ipswich in 1789 and established an engineering industry. Sea-going vessels, increasingly steel rather than timber, were driven by steam not the wind and the local market for hemp ropes collapsed. The very last of the Ipswich ropewalks, Alan Road ceased production at the end of the 19th Century.

One of the requirements of the new engineering industries that were developing on the quaysides was accommodation for the agricultural labour that had come into town. The swathe of east Ipswich between St Helen's and St Clement's (known as the Potteries because bricks and roof tiles had been made on the site) became an area of high density (low rise) housing. The property was cheaply and hastily built, a disadvantage as overcrowding and lack of facilities meant they soon became slums.

The area was partially cleared in the 1930s, with the remaining properties swept away immediately after the Second World War. The cleared land was used to build the new Civic College, opened in 1961 and becoming Suffolk College in 1974. St Edmunds House was built in 1979 for the county council on what had been the college car park; this building  was laterc onvertediinto apartments. The tower block of Suffolk College was demolished in 2010 and a new building constructed closer to Rope Walk (Suffolk New College). The remaining buildings on the south side of the site (adjacent to New Street and Long Street); including the College Library, fell into the ownership of the university.

Did you know that there is a Museum of Knots and Sailors' Ropework in Ipswich***? As well as the obvious artefacts there are rope makers’tools and interesting examples of the rope makers’ art."
John Norman

See also our page on Brick-making in Ipswich.
Other major industries in Ipswich history include:-
Ship-building
Heavy engineering
Stay-making (corsetry)
Perhaps they all deserve a page on this website.

Related pages:
The Potteries and Ipswich Ware;
Brickyards for brick and tile-making in this area of the town and elsewhere;
County Hall for information and maps relating to the County and Borough Gaols;