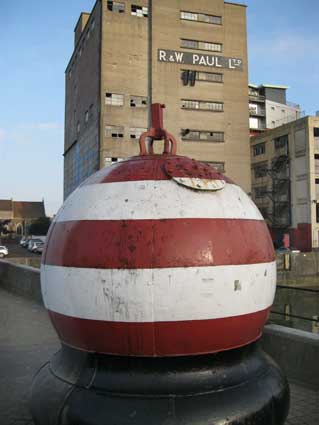 2012 images
Lettering crops up in the most unusual places. This striking, graphic paint-job on the sphere which sits on what some call 'the observation platform' over the tidal Gipping/Orwell as it enters New Cut is something of an icon in Ipswich docks. Behind it is the remaining Paul's silo on St Peter's Wharf. Scroll down for more images of these. 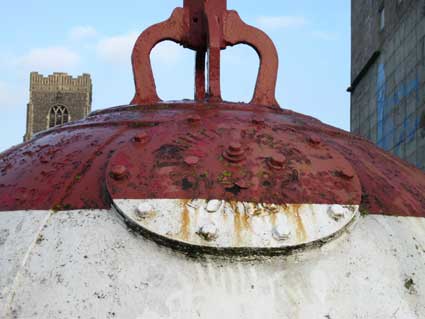 It was only in 2012 that we noticed the lettering incised into the metal plate at its top, etched and eroded by its contact with the sea and the weather. Peeping over the buoy is the tower of St Peter's Church.

One source tells us that 'TH' indicates that the buoy was used on the River Thames*.  This large red and white buoy would originally have served to mark deep water on the Thames; safe for anchorage of large ships. (*Another explanation might be thet it's a standard 'Trinity House' prefix.)

For the group of marine buoys on 'The island' nearby, see below.
For commemorative tablets and an abandoned telephone box, see Stoke Bridge.

2018 image
Standing with the Trinity House buoy directly to the left, the view of St Peters Dock shows how wide the water is here (a dock outside the locked Wet Dock) before it shrinks under Stoke Bridge into the canalised part of the River Orwell. Period photographs show it cluttered with saling barges, indeed Sailing Barge Victor, usually moored in front of the Custom House, has made the trip out of the Wet Dock, turning sharp right past the new tidal barrier and along the length of New Cut to reach this lagoon. Of course, this journey is only possible at high tide, but it would be good to think that historic vessels could make the trip on high days and holidays to commemorate the great days of water trade in Ipswich. The photograph was taken during the refurbishment of the dockside areas, a precursor of the Ipswich Borough Council's plans for the whole 'gateway to the Historic Waterfront' site, including the Benet Aldred house in College Street, the Paul's malting silo, the remnants of the Burton's factory and the foundry building on the corner with Foundry Lane.
The buildings show in the photograph include The Mill to the left, with the old maltings, painted pink, bearing the 'Edward Fison Ltd' sign and Stoke Bridge Maltings to the right. The Genesis high-rise on Stoke Quay can be seen above them. 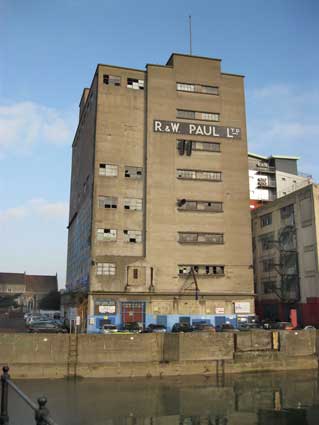 2012 image
The Paul structure, while bearing broken windows and not very pretty, is the sole surviving silo of the ill-fated Waterfront Regeneration which ran out of Irish bank funding and left us with the empty tower block 'The Mill' on St Peters Dock and 'The Wine Rack' on Common Quay (not completed until 2020). Furthermore, throughout 2012 this building was part of a rather fine illuminated art installation with lights which faded from one colour to another.

2019 image
This close-up show the way in which the tiling – we assume that it is tiled, or similar material – fits together as a mosaic. 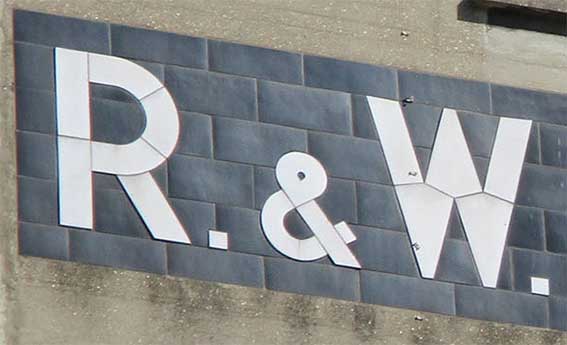 See our Paul's malting page for the story of the company and its importance to Ipswich.

Burtons factory, St Peter's Wharf
To the right of the Paul silo is the butchered part of the Burtons factory, both of these overlook the lagoon (St Peters Dock) at the end of New Cut before it narrows down to flow below Stoke bridge(s). 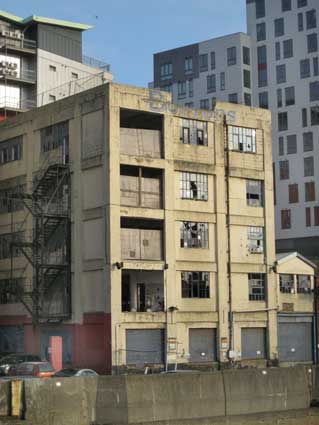 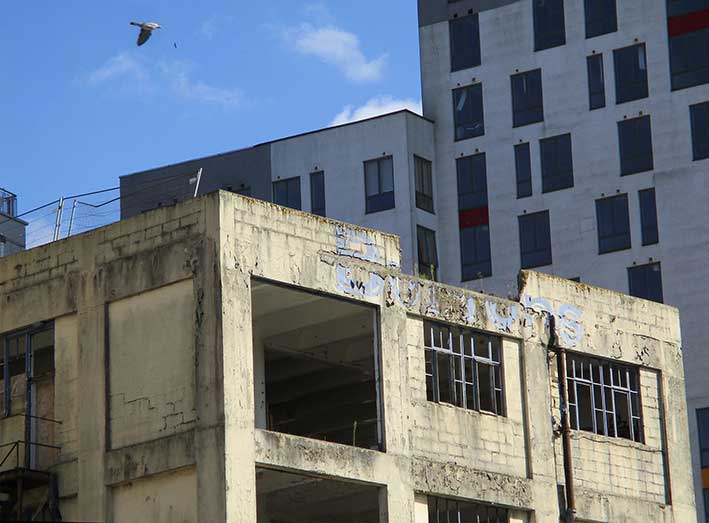 2018 image
Contractors busted through the fabric of the building at the top where the confectionery company once painted its name:

to work on the part of the building fronting College Street which is now the mainly residential 'Cardinal Lofts'. You can see the mangled insides of the Burtons building from Foundry Street which runs beside it. The College Street version of the namestyle which used to be opposite Wolsey's Gate is long gone (see our Burtons page and see it disappear).

This grim image by Tony Wooderson highlights the state of the Burtons block on St Peter's Wharf. Thanks to Tony. 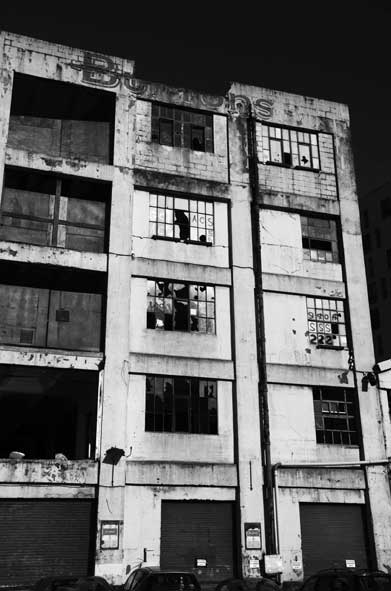 Here is a snap of these buildings from 1982, when Stoke Bridge was being doubled showing the original brick built Paul's maltings to the left, tragically destroyed by fire, later demolished and made into a car park. The 'R & W' characters to the left are shaded by an upper platform. The Burtons building bears a more 60s/70s-style of italic serif capitals on a panel.

[UPDATE: June 2013. Peter Johnson, got in touch while working on a project involving the buildings shown above. He has kindly sent three photographs of them taken in the early 1980s when the brick-built Paul's maltings was still intact to the left and the tramway was still intact as it crossed Bridge Street. 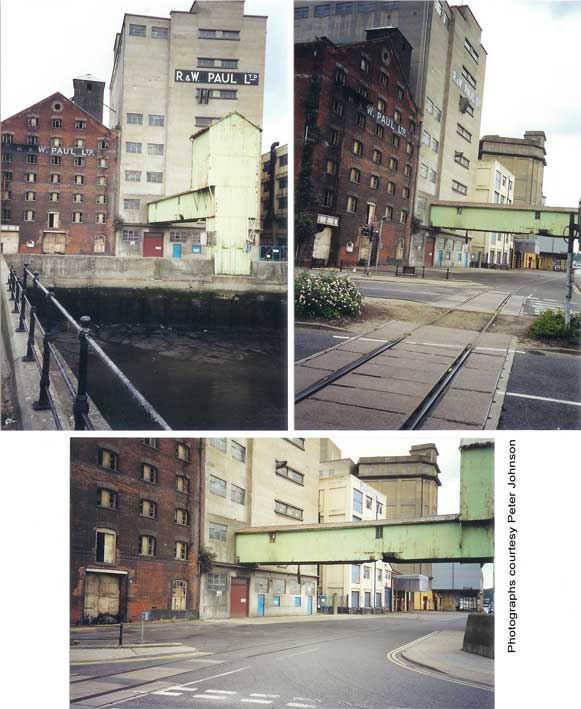 Early 1980s images
Peter comments:
"I am a finescale railway modeller working on a new project which features two buildings based on R&W Pauls and Burtons of Ipswich – partly because they were used as a backdrop for posed photographs by British Railways of new diesel shunting engines in the late 1950s/early 1960s, and partly from visits to friends in Felixstowe in the early 80s when I detoured via Ipswich docks as it was then one of the few remaining places with street-running railways into dock side facilities ... I have attached a couple of photo scans of how things looked in the 1980s before the ship loading gantry was taken away…. At that time the rails were still in use, I think."]
Following these rails eastwards, then off to the right onto 'The island' reveals several crossovers and diamonds which are preserved rather than being removed or covered over as on the northern quays.

[UPDATE 8.1.2016: we have at last caught up with Peter Johnson's finished models. First are the prepatory stages, then the exhibited items. Peter writes: "... my model [is] inspired by the Paul building, but located into a fictional setting. Anyway it has now been out to a couple of exhibitions and been very well received. At the first (York) a man in the crowd recounted how he had worked for R&W Paul within that very building back in the 1970s, and enjoyed seeing it re-created in miniature!" Thanks to Peter for excellent pieces of work and fine photographs of it. Recent rumours that an owner of the Paul building is planning to convert it into accommodation – rather than demolish and rebuild – could preserve the R. & W. Paul sign.] 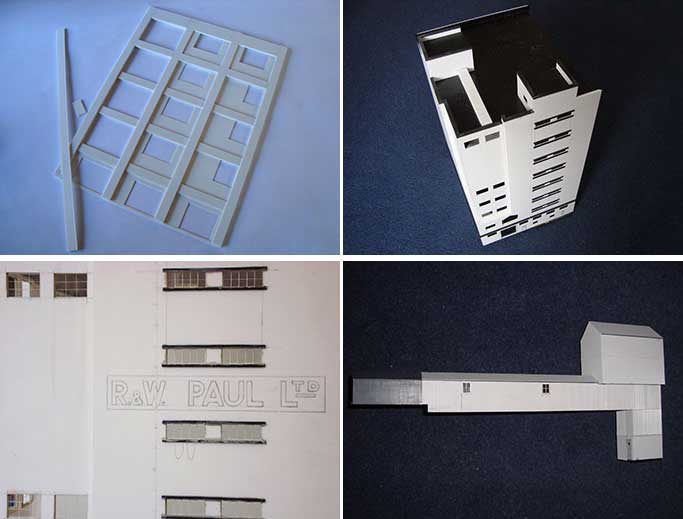 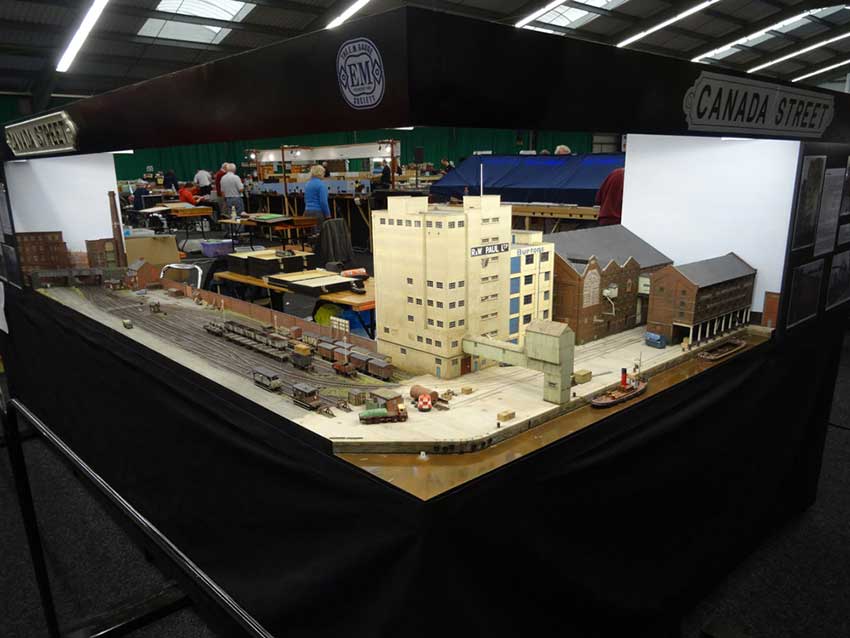 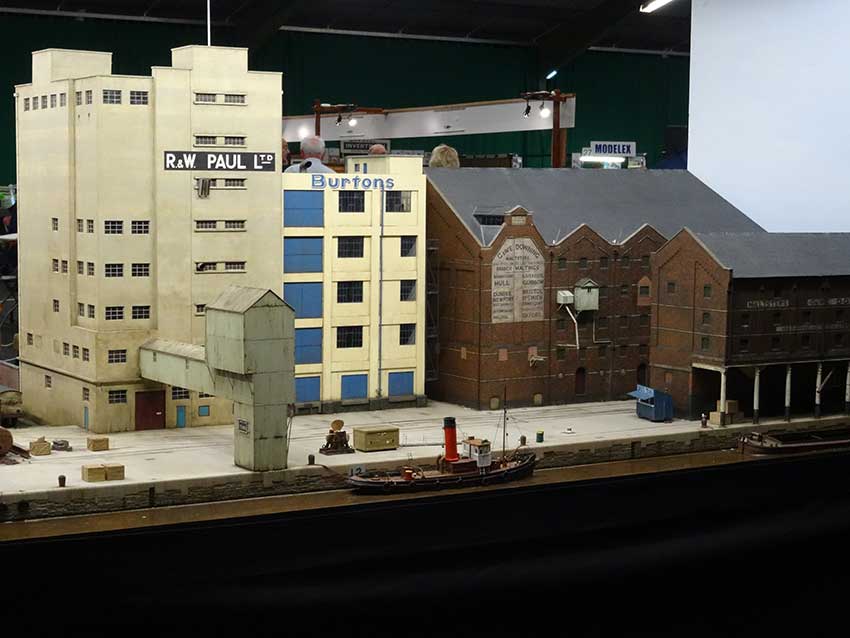 Peter has imposed on the brick malthouse, centre-right, a lettered upper section and a large painted wall advertisement:

On the brick building over the collonade is further G. & W.E. Downing lettering. Both examples resemble to those found on the company's Gloucester Docks malthouses (see below). The tiny refreshment shed bears the vernacular lettering 'DEE'S TEAS', which presumably comes from a period photograph and adds a nice human touch to this heavy industrial scene. 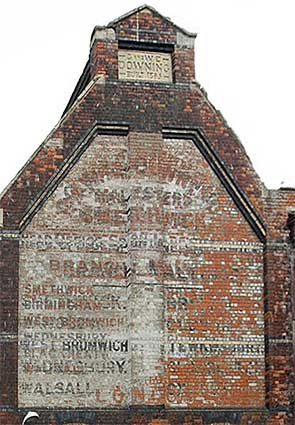 Multiple signs and weathering at Gloucester Docks
'Maltsters George and William E. Downing from Smethwick in the West Midlands opened their first malthouse in Gloucester in 1876. As their business expanded, they built a second malthouse to the north of the original building in 1895. Designed by Walter B. Wood and built by the Gurney Brothers, it consisted of three ranges. The first two included a basement with a steeping tank in which barley was soaked usually for a couple of days and a working floor where the barley was allowed to germinate and sprout, a malt room where malt was stored and bagged, two more working floors, and an attic where barley was stored. The third range, to the north included a large malt kiln and a smaller barley kiln, where germination was inhibited. Part of this building was also used to clean and repair returned malt sacks. The absence of windows on the upper floors of the third range gave Downing ample space to advertise their business.'
[Information from: http://paintedsignsandmosaics.blogspot.com/2010/09/g-w-e-downing-maltsters-gloucester-1.html]

See our Wet Dock map page for an explanation of the growth of both rail and tramway access to the dockland area of Ipswich.

The "Lost" Paul's Maltings
[UPDATE 28.12.2013: John Bulow-Osborne writes:
"... the [photographs, below] of Paul's maltings were taken only a few days before it burned down."] The red-brick, 18th century maltings building to the left was destroyed in a mysterious fire in 2003 and the shell eventually demolished. 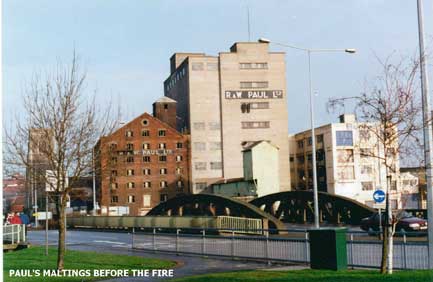 Photographs courtesy John Bulow-Osborne
The fine views below show the red-brick maltings, complete with lettering on back and front:

It does appear that there was something else lettered in white on the black 'T' shape above the Paul's sign on the rear of the building. Sadly destroyed, it would have made a great, restored entrance building to the Wet Dock from Stoke Bridge. 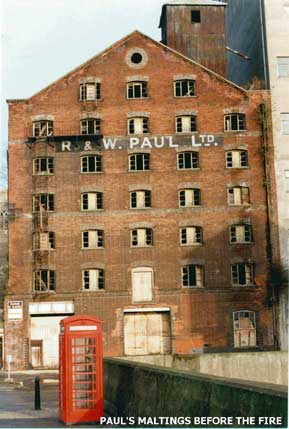 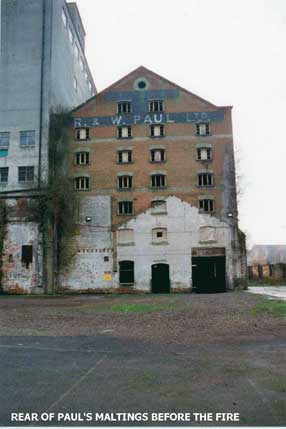 Below: this photograph from the Ipswich Society Flickr collection (see Links) from 1985 shows the Paul's maltings and the K6 telephone box shown on our Stoke Bridge page. The telephone box still has its door at this time, but several of the panes of glass have been stoved in. For more on telephone boxes, see our Street furniture page. 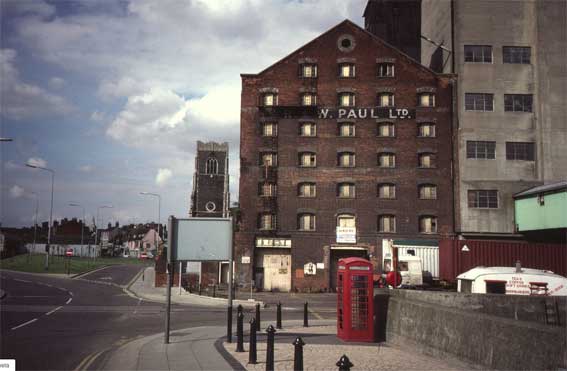 Photo courtesy The Ipswich Society
For more images of these buildings and of the northern quays during the 2005/6 Waterfront demolition and clearances see our Waterfront regeneration page.

'The Island' buoys
On entering the island site, close to the present-day car park, a group of maritime buoys are displayed in mounted, restored form. 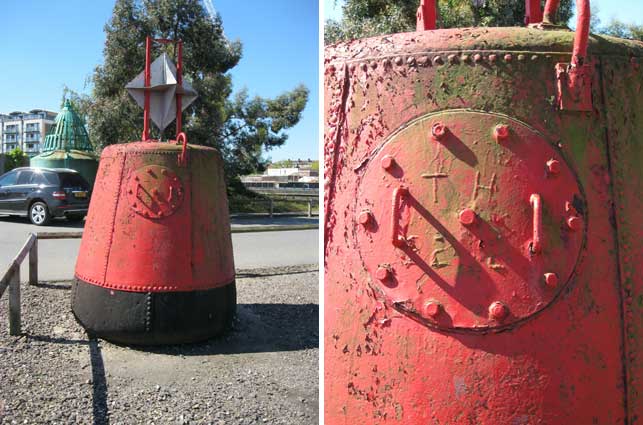 This Trinity House example bears on its bolted plate the relief lettering: 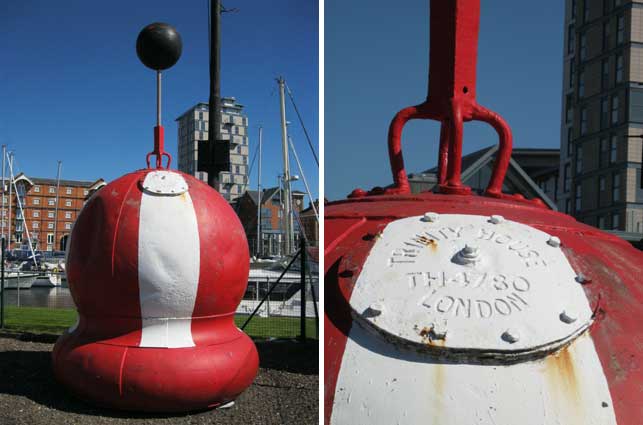 The more spherical buoy has a similar, but much better condition, plate to that on Stoke Bridge (shown at the top of this page).:

Although no lettering can be found on the green-painted examples, they are included here as they complete the group. 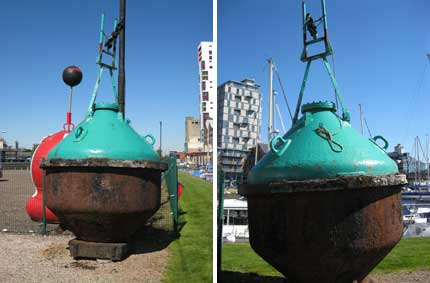