Dockside at ground-level (The island)


Lettering can be found on all sorts of easily ignored dockside furniture. Much of it we walk on without noticing. Let's start on 'The island' near to the two blue Babcock cranes (close to the dock-gates). 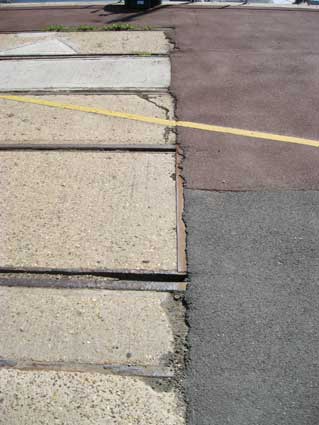 2013 images
The tramway lines disappear under carpets of red and grey tarmac.
Working back towards St Peter's Wharf, several crossover control points can be found. The first is the best in that both the lever can still be seen, its top with in the metal lined cup to enable the human hand to grasp it. Also the foot of the lever is covered by a plate with a fine pedigree: 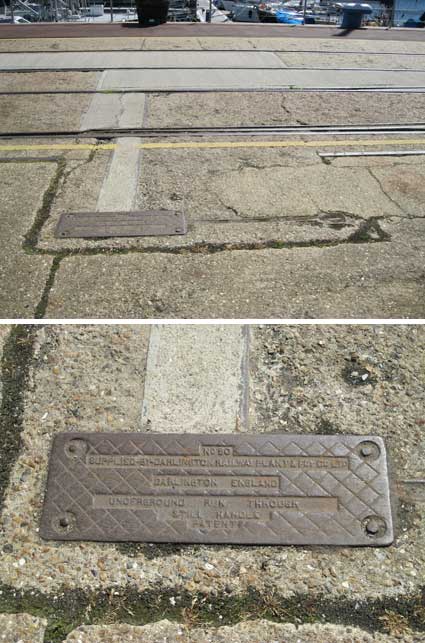 The market town of Darlington in County Durham lives in history because of its association with the railway pioneers. The world's first passenger rail journey was between Shildon and Stockton-on-Tees via Darlington, on the Stockton and Darlington Railway in 1825. Darlington Railway Plant and Foundry Company Limited was incorporated on 28 Aug 1899.
See Borin Van Loon's painting Underground Run Through based on this casting.

There follow a few more point controls in varying states of preservation. 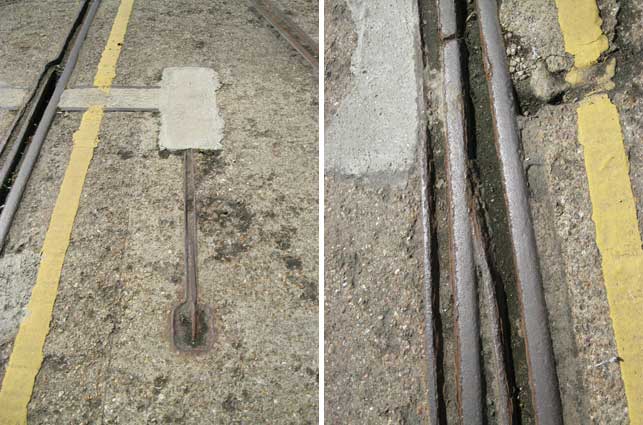 The following two still have the metals covering the lever trench. One bears the casting number '026'[?], although the zero is either damaged, or another character altogether. 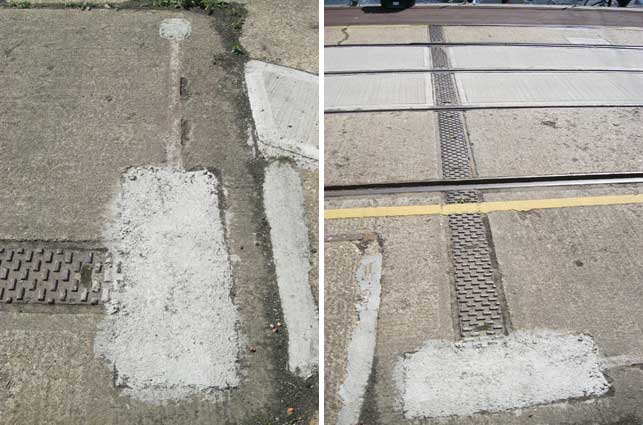 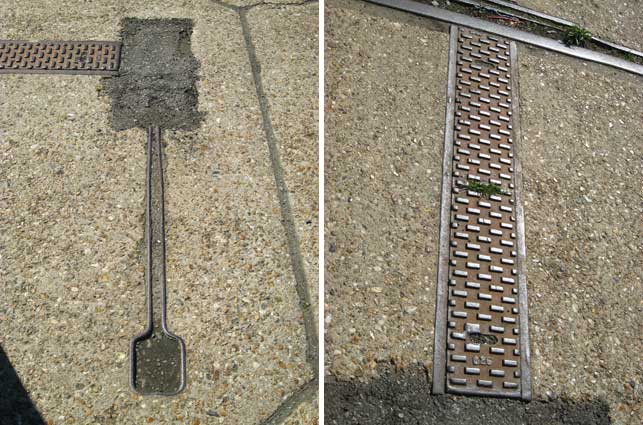 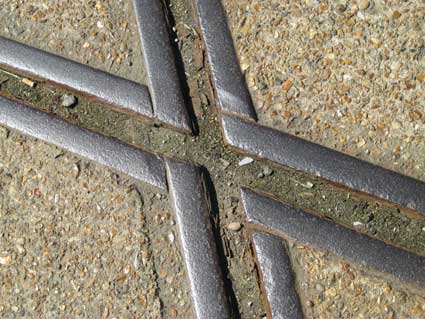 The tramway lines fit together in intriguing ways.
There are more photographs of the tramway and other features on our page about 'The island'.
A tramway is a set of rails laid in the surface of a road, rather than being raised on sleepers and a clinker bed. Although customarily used by tramcars in towns and cities in Victorian and Edwardian times (trams having had something of a rebirth in the late 20th century), these tramway lines have also been used by horse-drawn, steam and diesel vehicles particularly for the moving of freight wagons – exactly as we see around the Wet Dock and beyond (see our Wet Dock map page for an explanation of the growth of both rail and tramway access to the dockland area of Ipswich).

Drains / Manhole covers
Then there are drain and manhole covers. Most are lettered in some way. The two square covers, split diagonally, are respectively:

*See below for more on the Kitemark. 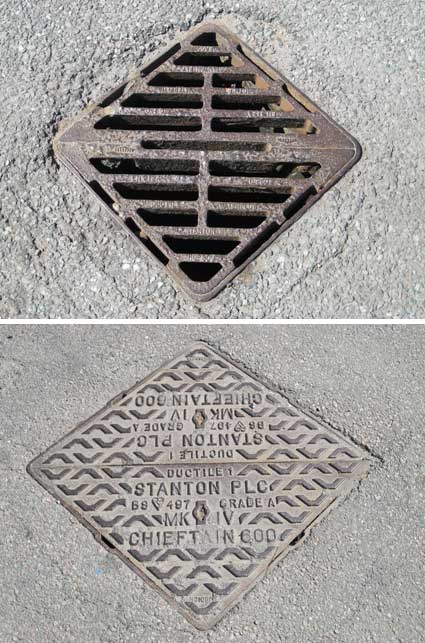 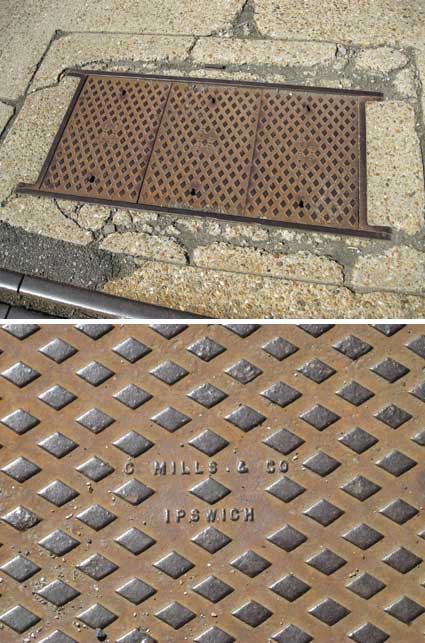 The three-section cover has:

as a manufacturer: an Ipswich foundry we were unaware of. A small cast hydrant cover lettered 'ICWW' (Ipswich Corporation Water Works – see our Street furniture page) can still be found on the corner of Bond Street and Rope Walk. It has 'C. Mills & Co, St Nicholas Foundry, Ipswich' in a central cartouche.  Similar examples still exist on Ipswich streets.

C. Mills & Co.
We are indebted to Brian Warner for the following information quoted verbatim from various Kelly's. The earliest he has found for C. Mills & Co. so far is 1900 and the latest is 1941 (with the company in 1956 at 49 Riverside Road, probably later taken over by S. Sacker, scrap metal dealers).

Iron founders in Ipswich, Kelly's Directory 1900
Cocksedge & Co. works and office, Greyfriars road, Ipswich (also at Lowestoft and King's Lynn)
Mills C. & Co. Tanner's Lane, Ipswich
Ransomes, Sims & Jefferies Limited, Orwell Works; warehouses and show rooms, Princes street and Queen street, Ipswich
1916 Directory   Mills C. & Co. St Nicholas Foundry, Tanner's Lane, Ipswich [see display ad from same directory]
1925 Directory   same entry
1937 Directory   Mills, C. & Co. iron founders & general engineers; makers of all kinds of builders' and constructional ironwork; castings in brass & iron, St. Nicholas foundry, Tanners Lane. T.A. "Mills, Ipswich 3525;" TN 3525.
Tanners Lane appears on White's Map of Ipswich of 1867 continuing from the southern end of the original Lady Lane as it crossed Mount Street in the western area of the town (the area here known as 'The Mount', a density of housing comparable with the Potteries around Rope Walk) which became Civic Centre in the 1960s – now demolished – down to Birds Gardens which approximated to the line of the present Princes Street, near the Willis Building (see our 'Before Willis' section for a 1902 map showing Tanners Lane). It's more-or-less parallel to the still-existing Currier's Lane and just to the west of it; its remains now lying beneath the lower section of the present Civic Drive. Tanner's Lane is appropriately close to Currier's Lane (see Street name derivations) which was formerly Barker's Lane and Pudding Lane, given the common trades carried out there.

Again, the diagonally split square covers prominently show the British Standards Institution 'Kitemark' (see its history, below) along with:

(upper example) and below: 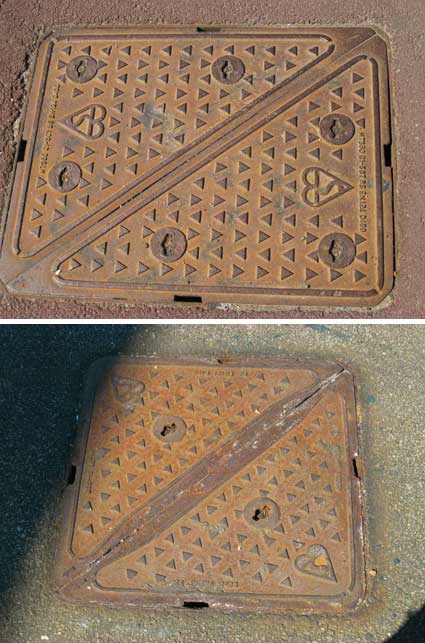 The familiar road gutter drain cover has non-slip diamonds on the cross-bars, also with the founder: 'C. MILLS& CO ... IPSWICH'. Below it is a fire hydrant cover:

The Kitemark
Sir John Wolfe-Barry, the man who designed London's Tower Bridge, instigated the Council of the Institution of Civil Engineers to form a committee to consider standardizing iron and steel sections on 22 January 1901. In 1903 the need to indicate to buyers that goods were 'up to standard' led to the creation and registration of the British Standard Mark - to become known later as the Kitemark. It was first registered as a trade mark for tramway rails and the number of gauges of tramway rails was reduced from 75 to 5. On 22 April 1929, the Engineering Standards Committee, (since 1918 the British Engineering Standards Association) was granted a Royal Charter. A supplemental Charter was granted in 1931 changing the name, finally, to British Standards Institution.

There are several unlettered manhole covers in varying states of repair.

Bollards
A bollard is a short vertical post. Originally it meant a post used on a ship or a quay, principally for mooring. The maritime requirement for the securing of a rope gives charcter to those found around the Wet Dock. These ones on the island are almost all painted blue-and-white and are heavy cast iron quayside furniture. The first cylindrical one has a broader cap to capture the rope, with the added feature of a step a quarter of the way up; sadly no lettering is found. 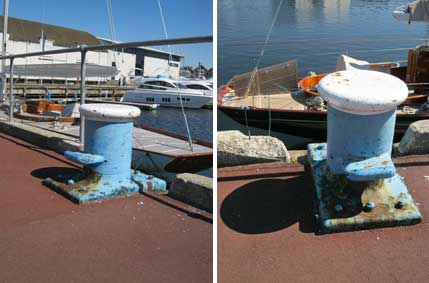 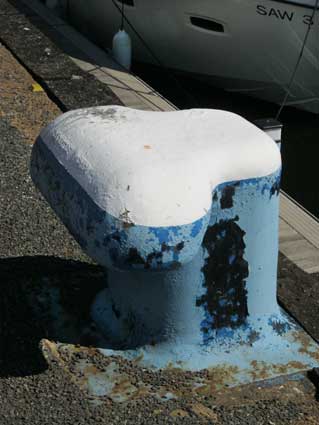 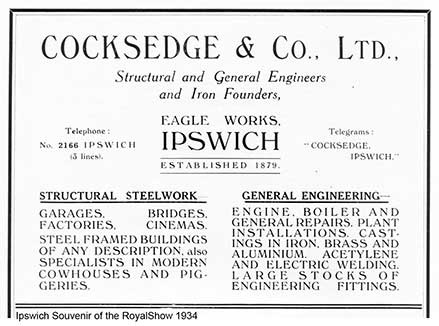 The second type is in three lobes at the top which project beyond the stem on the land side. And, despite may coats of white paint on the cap, the foundry name can be read:

Cocksedge started in Grey Friars Road in 1885. They moved to Rapier Street in 1903, specialising in structural engineering including the Ipswich Town Football Club grandstand and Goonhilly 2 satellite dish. They went into receivership in 1985. 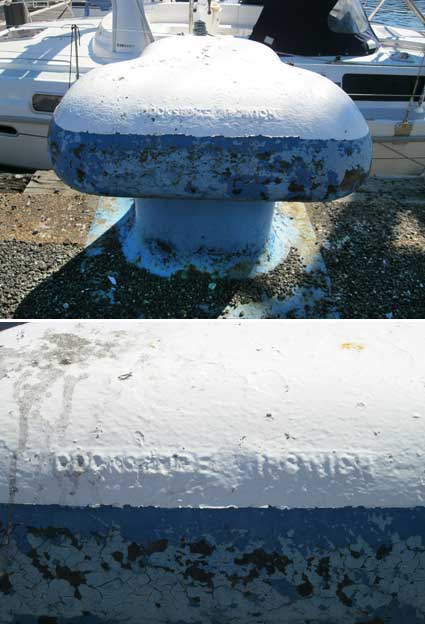 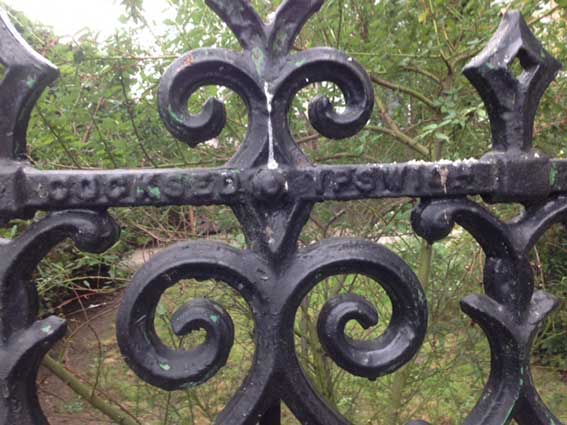 2017 image
See our Garden gates and railings page for more Cocksedge castings and detail on the Cocksedge foundry. 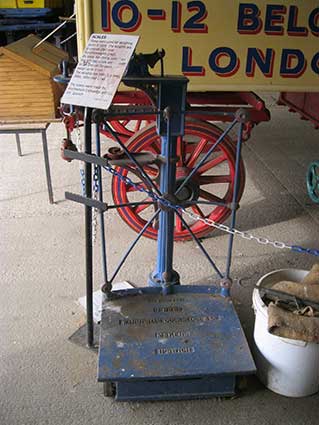 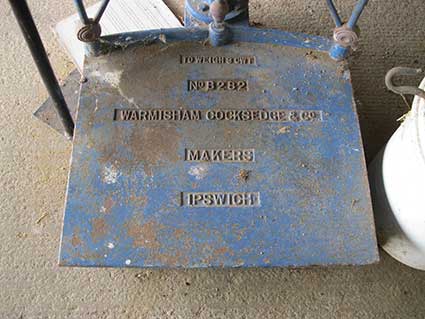 'TO WEIGH 3 CWT
NO. B282
WARMISHAM COCKSEDGE & CO
MAKERS
IPSWICH'

The sign reads: ‘SCALES. These were used for weighing sacks of corn. The weights are in pounds (lbs) and hundredweights (cwt). By using the sliding weight on the arm, the scales are accurate to 4oz. [ounces] and can be used to weigh up to 3 cwt. The weights are 14lb (1 stone), 28lbs, 56lbs and 1 cwt.’. The first evidence of specialist scale-makers in Suffolk dates from the 1850s. Before 1860 the London scale-maker Samuel Warmisham had set up a branch in Ipswich. The firm was bought by the large engineering firm Cocksedge & Co. around 1890 (eventually taken over by Averys in 1936). 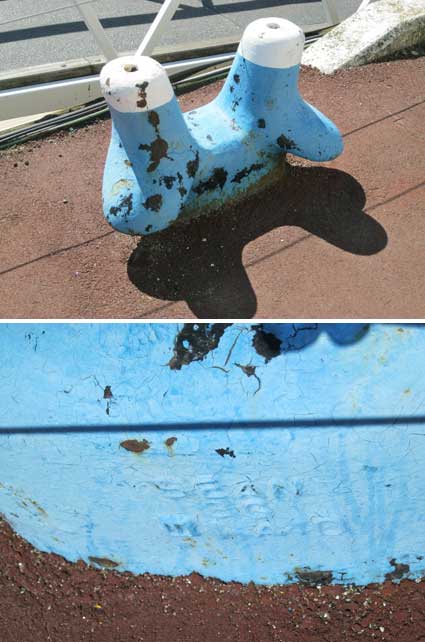 The third type on the island is more complex with two prongs projecting up in a 'V' shape, each with a projecting lobe pointing downwards to trap the rope. On the water face of this bollard are hard-to-decipher characters:

With the building of the marina facilities all around the Wet Dock in Ipswich over the years, the lower walkway has been installed (visible in the upper portion of the photograph below), but some of the original timbers have been left and they provide an interesting contrast with the chromium and fibreglass leisure-craft which fill the Wet Dock in 2013. 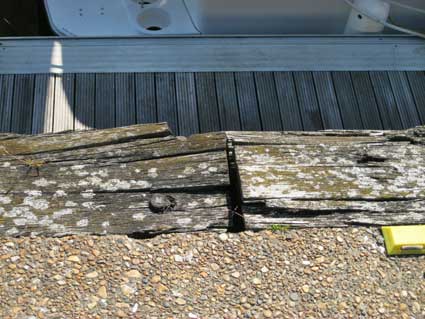 The final pair of bollards on the island are simple, elongated mushroom shapes. The last (shown below) is a little lost at the tail end of the grass strip nearest to St Peter's Wharf and may no longer be in use. 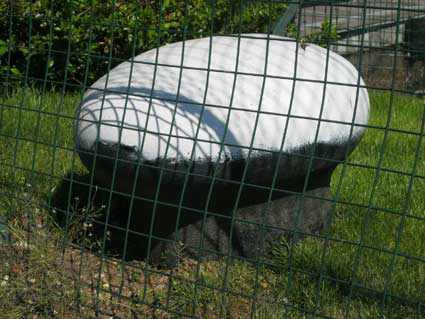 Moving from here round onto Albion Wharf, we have included a page of the ground level dockside furniture to be seen on the northern quays. (See our Wet Dock map if you're confused.)
Further round the dock is Ransome's Orwell Works site with remnants at ground level.
See also our Lettered castings index page.