2013 composite image
This fascinating complex of buildings behind the Tudor merchant's house at 80 Fore Street was put onto the market in 2004, including the public house on the Wet Dock waterfront (initially called The Malt Kiln). By 2009 the buildings from the courtyard down to the dockside had become a bar/restaurant business called "Isaac's".  The painting in pencil, watercolour and gouache (below) is by Alan Waddington Bellis (1883-1960) and shows its rather dilapidated condition in 1927 (Ipswich Museums' Collections). The Saleroom is so-called because it is thought that customers came there to inspect the merchant's woollen cloth before it was exported. The Crossway or crosswing which stands at right angles to the Saleroom dates from between 1530 and 1550. The herringbone brickwork infills and the heavy windbraces of the oak roof mark this as a building of high status.  The waggon entry on Fore Street leads to the courtyard, under the Crossway and down to a private quay on the Wet Dock where ships loaded Suffolk woollen cloth onto ships bound for ports in the Low Countries and perhaps further afield.

Lord's Granary, Ipswich, 1927
The river would have come up through the walkway to the bottom of the steps.

Lord's Crossway and Saleroom, 2004
The photograph above (taken from the Ipswich Society Newsletter, Issue 154) provides a fine comparison. The gathering marks the award by the Ipswich Society to owners Stuart and Gina Cooper, architect Anthony Rossi and builder John Hogg of an Award of Distinction for "Refurbishment of the Saleroom and Crossway" on 12 November, 2003. The major structural repairs were started by the Coopers over twenty years ago to rescue the redundant buildings from decay. Ipswich Borough Council and its Conservation Officer, Bob Kindred, have assisted in bringing parts of the site into useful, rate-generating activity. The west side of the site has been converted into office spaces and an art gallery (The John Russell Gallery in Wherry Lane). English Heritage grants aided the long and extensive restoration of the buildings shown here and planning permission was obtained in 2003 to create a restaurant in the Grade II listed east warehouse.

John Lee has been kind enough to send these photographs of a pair of rather good watercolours of the complex "dated July and August 1924... They are by the artist W.G. Merrick... I noted a similar 1927 painting in the Ipswich Museum." 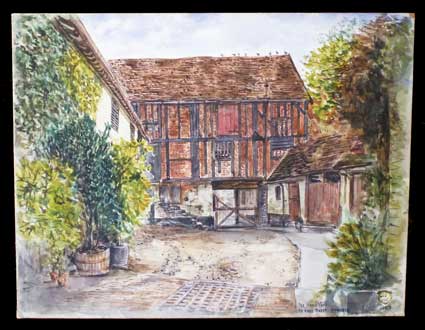 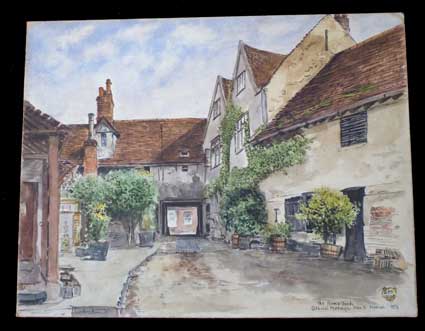 Images courtesy John Lee
The left painting is inscribed: 'The Home Yard, 80 Fore Street, Ipswich, 1924.' It shows the crossway seen from under the carriage entrance on Fore Street with rather nice plants in tubs near to a cobbled surface, a large gate across the entry beneath the crossway and external steps to the left.
The right-hand painting is entitled: ''The Home Yard, Cobbold's Maltings, Fore Street, Ipswich, 1924.' It is the reverse view, from beneath the crossway, of the merchants' house to the right with storage buildings across the yard to the left and the carriage entrance to Fore Street, with part of the Lord Nelson public house visible over the road.
(Both paintings have 'GOD first' in a golden shield.) 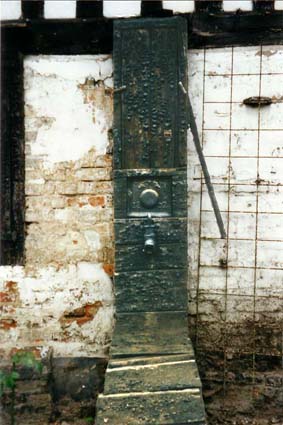 An enhanced view of the pump during refurbishment in 2004.
An independent developer opened these buildings as a bar/restaurant in 2009. Visitors to "Isaac's" will have the treat of seeing the interior details, sensitively restored of this famous survivor in the history of the dock and of Ipswich's maritime heritage. We know that John Cobbold - a very famous local name because of the dominance of the Tolly Cobbold brewery on Cliff Quay - once lived in the Isaac Lord house. One piece of evidence for this is the fire-damaged water pump (above) which stands  against the Saleroom wall in the courtyard reached via the entry in Fore Street, opposite the Lord Nelson public house (shown here).

See Links for the Village Pumps website for a national overview of these surviving curiosities. This courtyard has, by 2010, become an area accessible to the  public (via the "Isaac's" bar/restaurant) and the characters above the tap can be seen in these June, 2010 images: 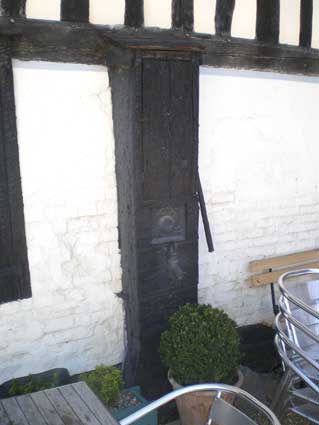 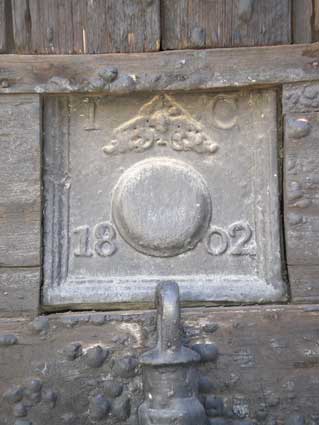 The "I" is assumed to be a period character for 'J' as in 'John Cobbold'. Robert Malster's fine 'Ipswich: an A to Z of local history' (see Reading List) tells us of three notable men of this name. The first John Cobbold (1746-1835) was the third generation of the brewing family; he built Holywells Mansion around 1814. The second John Cobbold (1774-1860) was his eldest son and he married one of the Chevallier family of Aspall and he took a leading role in bringing the steam railway to Ipswich. The third was, in turn, his eldest son and was known as John Chevallier Cobbold (1797-1882) and was involved with his father in the Eatern Union Railway; he also represented Ipswich as Member of Parliament for twenty years, was a leading light in the planning of the Wet Dock and was Mayor of Ipswich in 1842: the year the dock opened. As this last 'John Cobbold' would have been only five years old in 1802 (and would really need the initials 'J.C.C.'), we wonder if the pump lettering celebrates the second 'John Cobbold' who would have been twenty eight in 1802.  However, the first 'John Cobbold' would have been fifty-six when the pump panel was dated, so it could have been him.

During the Cobbold families' ownership of the ‘Isaac Lord’ complex, buildings were used as maltings and the Wherry Inn, a local pub, was on the quay. Isaac Lord, a local businessman, bought the site in 1900, and in 1930 Reginald (Reg) Cooper joined Isaacs Lord's business, helping grow the firm's corn and coal interests, eventually becoming the owner of the property.  Isaac Lord died in 1942 but his daughter lived in the merchant house fronting Fore Street until 1976. Once the business had ceased trading, the Cooper family eventually worked hard to gain funding and begin the restoration of parts of the site. They enabled the building fronting the dock to be used as a temporary maritime museum in the 1980s. The whole complex was eventually purchased by Aiden Coughlan, who has taken the sympathetic restoration and refurbishment of Isaac Lord's as a bar and restaurant business to its present success. Upper rooms house a restored machine for crushing cattle-cake and the old (1960s) Lloyd's Bank building is now the Briarbank bar and brewery.

We don't know of any other water pump surviving in Ipswich and certainly nothing to rival the Ransomes marvel in Hadleigh.
See also our Lettered castings index page.

Around 1900, Isaac Lord bought the buildings and traded in corn and coal until the 1980s, leaving his name prominently painted on several walls to be read by us today.